China's top economic planner has declared initial success in its efforts to ensure coal supply and stabilize prices, saying that daily coal output has reached a peak in recent years and prices have dropped sharply over the past week. 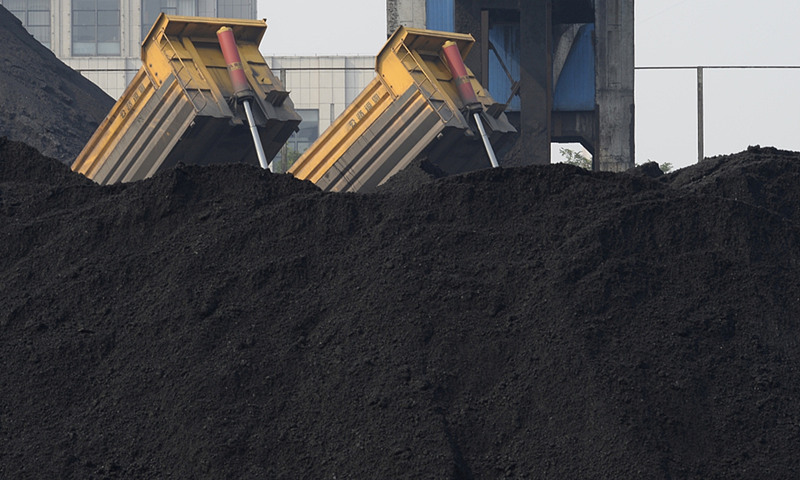 A coal mine in Xiaoyi City, Shanxi Province. (Photo: VCG)

"The work of ensuring coal supply and price stabilization has achieved initial results, and the national coal supply and demand situation has improved significantly," the National Development and Reform Commission (NDRC) said in a statement.

Based on recent coal supplies, power plants in China are expected to stock more than 110 million tons of coal, enough to sustain national usage for 20 days in order to ensure power supply and a warm winter for the Chinese people, the NDRC said.

Since late October, daily coal output in China has held at more than 11.5 million tons, increasing nearly 1.1 million tons compared with late September. Daily output reached as much as 11.72 million tons, the highest level in recent years, according to the economic planner.

The coal inventory at the port of Qinhuangdao in East China's Shandong Province, a benchmark of China's coal supplies, surpassed 5 million tons, a sign of major progress.

The settlement price of 5,500 kilocalorie thermal coal at ports has declined to 1,500 yuan per ton and 1,200 yuan at coal pits, down nearly 1,000 yuan compared with a week earlier, said the NDRC.

"Coal prices have dropped enormously and I cannot tell when it will end," Zhao Yang, co-founder of Chinese coal market information site Meitan Jianghu, told the Global Times on Monday.

Traders are watching the market and avoiding deals amid the country's regulatory efforts, Zhao said.

In northeastern China, one of the nation's coldest regions, the inventory is now 12.7 million tons, doubling the level of late September and enough for 32 days of consumption.

A source in a coal power plant in North China's Inner Mongolia Autonomous Region told the Global Times on Monday that coal stocks at the plant can last for at least 20 days. He noted that the maximum coal stock volume is 350,000 tons.

"Even though the coal price has fallen sharply since the government called for increasing output, the cost for coal transportation has risen for multiple reasons including tighter epidemic prevention and control measures due to the latest COVID-19 flare-ups, as well as the surging fuel prices," said the source.