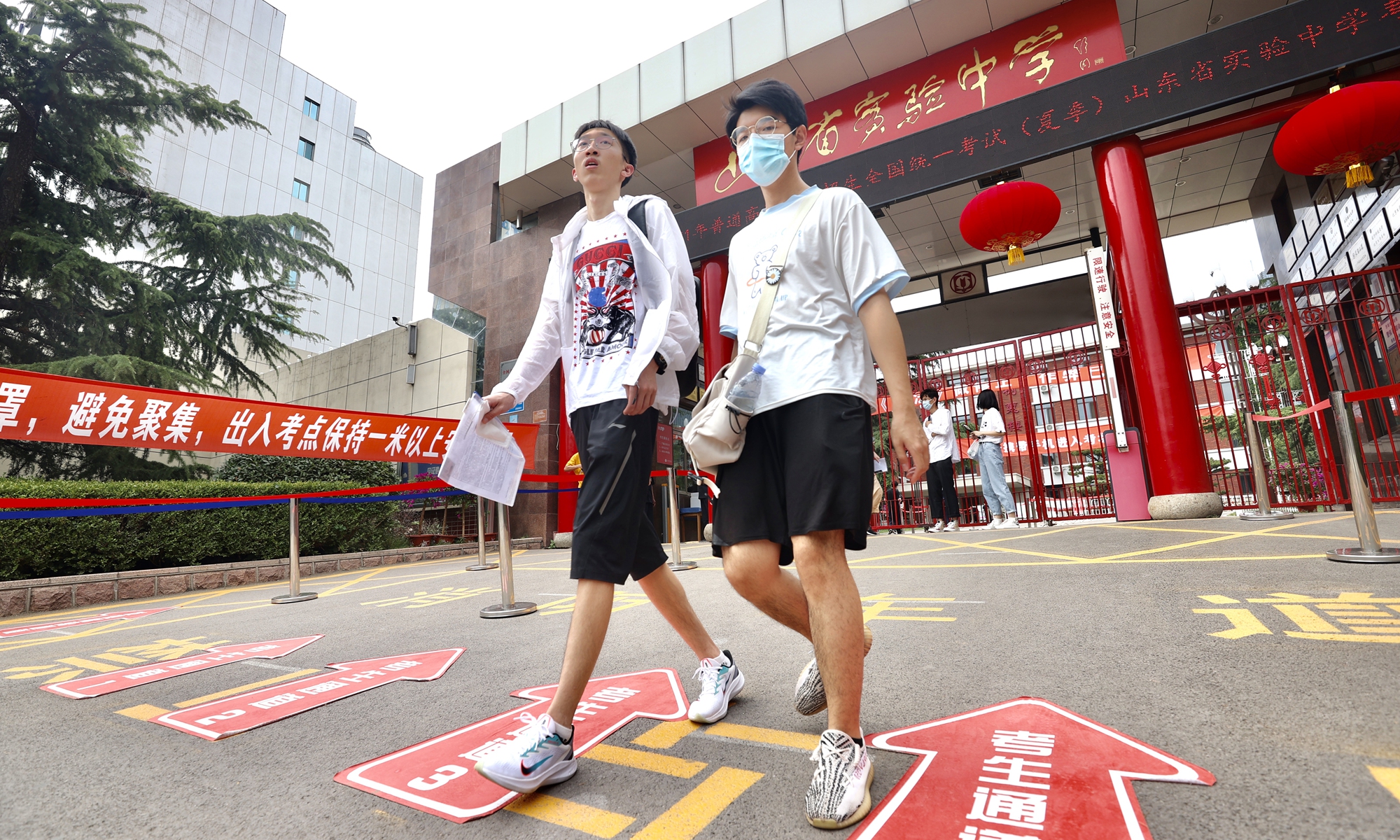 Students in a high school in Jinan, capital of East China's Shandong Province, familiarize themselves with the test sites on Sunday as the Chinese national college entrance examinations will take place on Monday and Tuesday. (Photo: cnsphoto)

A total of 10.78 million Chinese students will step into the examination rooms on Monday to take their final step toward college. The country's biggest exams are kicking off on time despite sporadic COVID-19 cases in some provinces, with all departments fully prepared.

Since 2003, gaokao, the national college entrance examinations, has normally been held on June 7 and 8. However, in 2020, the exams were pushed back one month and held on July 7 and 8, based on the country's overall epidemic prevention and control situation and the impact of the postponed start of school. It was the first time the gaokao was postponed nationwide.

About one and a half years after Central China's Hubei Province first reported the deadly epidemic, Chinese freshmen-to-be welcomed the gaokao to its original schedule, showing the country's various systems are resuming normal operations.

Although the majority of provinces and municipalities across the country have been free of locally transmitted COVID-19 cases for a relatively long period, strictest precautions have been taken everywhere in the face of this important examinations involving millions of people.

Most of the preventive measures that proved effective last year are being repeated this year. The Global Times found that exam sites in many provinces have mandated routine epidemic prevention measures, including requiring candidates and test administrators to undergo 14 days of health monitoring in advance, taking body temperatures when entering test sites, preparing alternate exam sites and quarantining exam sites.

One notable change from last year is that some localities require the personnel present at gaokao sites to be vaccinated.

In Beijing, all gaokao-related personnel in 1,566 test rooms at 90 test sites citywide have been vaccinated. Hangzhou, capital of East China's Zhejiang Province said on Saturday that 95.1 percent of its gaokao-related personnel have been vaccinated. A gaokao proctor also told the Global Times on Sunday that most personnel have received two shots, while others are required to provide proof of negative nucleic acid tests.

For the examinees, relevant departments are also doing their best to protect their health. In Hangzhou, 25 examinees who did not have a green health code had undergone one-on-one screening to rule out the possibility of COVID-19 infection.

Guangzhou, capital of South China's Guangdong Province, is the only city in the Chinese mainland that has high-risk areas. The city urged its gaokao takers not to travel to other cities before the exams.

Starting from May 24, all examinees in the city were required to monitor and submit their 14-day health status and whereabouts to their schools, the Guangzhou Education Bureau stated last week. For those failing to submit the information, a negative nucleic acid test result valid within seven days must be provided before entering examination venues.

Upon entering the examination halls, all students are required to take body temperatures. Those with fever, coughs, or other respiratory symptoms will be taken to an isolation venue specifically prepared for emergency conditions. They can still take the exams in an isolation room after getting approval from on-site medical workers and with a negative nucleic acid test result.

Examinees from low-risk areas are allowed to take off their masks after entering the venue, but students from medium- or high-risk areas, or those taking the exams in isolation rooms, must wear the protective facial masks throughout the whole process.

The Guangzhou city government has also arranged over 800 taxis and 10 buses to transport students from medium- and high-risk areas, the vice head of the municipal transport bureau said on Saturday at a press briefing. One-on-one, point-to-point services will be provided to pick up students from these regions, or those who have been deemed as close contacts of confirmed cases.

A student from Guangzhou, an asymptomatic COVID-19 case who had been sent to a designated hospital for treatment, will be allowed to take the exams in an isolation room in the hospital after his health condition was properly assessed by medics, authorities said at the press briefing on Saturday.

Two invigilators will proctor the exams through the surveillance camera installed in the room, with two nurses assisting the invigilators.

Guangzhou Zhenguang Middle School, an examination site located in the medium-risk area of the city's Liwan district, has taken a series of anti-epidemic measures to guard the safety of students during this year's gaokao, the Global Times learned on Sunday. The school houses a total of 796 students, and currently 623 students live in school dorms under strict closed-cycle management.