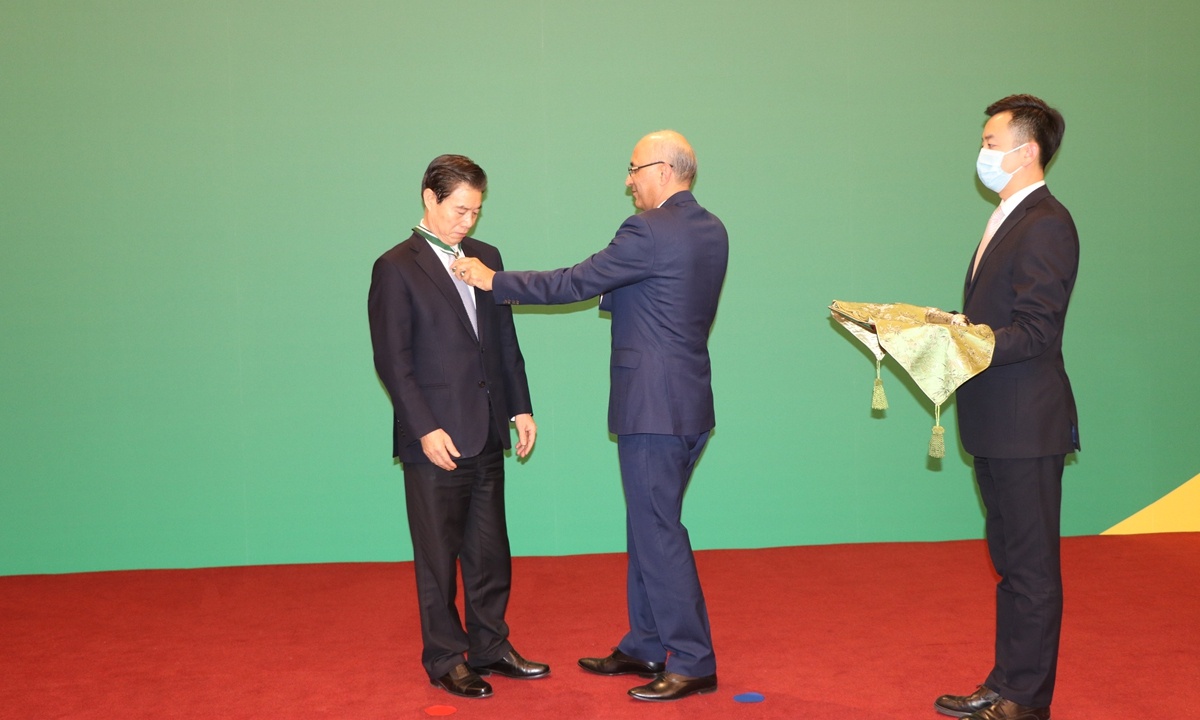 Chinese Commerce Minister Zhong Shan was awarded the prestigious "Hilal-i-Pakistan" by Pakistan's top diplomat in China on behalf of Pakistani President Arif Alvi at the Diaoyutai State Guesthouse in Beijing on Thursday.

The award was presented by Pakistani Ambassador to China Moin ul Haque to recognize Zhong's "outstanding services to Pakistan and strengthening of Pakistan-China relations".

Zhong, who heads China's Ministry of Commerce (MOFCOM), was instrumental in promoting the second phase of the Pakistan-China Free Trade Agreement, which came into effect at the start of 2020 and facilitated Pakistan's active participation in significant events, including the China International Import Expo and the 17th China-ASEAN Expo (CAEXPO), the ambassador said at the award ceremony.

The award is not only a personal honor bestowed by the Pakistani leader, but also a symbol of the trust and confidence Pakistan places in the time-honored all-weather strategic cooperative partnership, Zhong noted. MOFCOM would continue to work on deepening economic and trade ties with Pakistan, he said.

At a meeting before the award ceremony, officials from MOFCOM and diplomats from the Pakistani Embassy agreed to further promote Pakistan-China trade and economic relations in line with the consensus reached between leaders of both countries and for the benefit of the two peoples.

Pakistan's exports to China increased by 30 percent year-on-year in November, improving the trade balance between the two countries, according to the Thursday edition of the English-language Express Tribune, a Pakistani daily newspaper.

In November, Pakistan presented at CAEXPO as a Special Partner Country for the first time. The country will retain this designation at the 18th CAEXPO in 2021.

In August, the bilateral import and export volume of goods between China and Pakistan reached $1.4 billion, according to data released by China's General Administration of Customs.