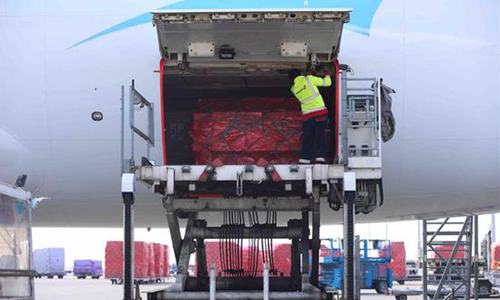 Medical materials from China arrive at the Liege airport in Belgium, on Wednesday. A batch of 1 million donated medical masks were flown in Belgium on Wednesday, en route to France. The medical supply was mobilized by two Chinese charities to help combat the spread of COVID-19. (Photo: Xinhua)

Chinese Canadians have played an active role in supporting Canada's fight against the coronavirus, including donating medical supplies to local hospitals and nursing homes and their contributions have been recognized, China's Consulate-General in Vancouver said in a press release, in response to Canadian outlet Global News' accusation that China has been "stockpiling" safety supplies.

The Chinese communities in Canada have served the social development in Canada for a long time and made great contributions to enhance the trade and people-to-people exchanges between China and Canada. Since the outbreak of the coronavirus, Chinese Canadians actively offered advice and help with the local battle against the epidemic, offering voluntary services to residential communities, mediating in purchases of medical supplies from China and donating medical supplies to hospitals and nursing homes, China's Consulate-General in Vancouver said on Tuesday.

It is a pity that the Global News report chose to neglect the Chinese communities' contributions, said the press release, adding that the report was misleading and full of fabrications and groundless accusations. "We firmly oppose it," said the release.

The release was issued after Canadian news outlet Global News published a report by Sam Cooper, in which the writer accused China of urging millions of overseas Chinese to bulk-buy medical supplies, which led to a shortage of personal protective equipment in Canada during the global pandemic.

China has always opposed attempts to politicize the COVID-19 epidemic, to stigmatize China and to label the virus. Since the outbreak of the virus, the Chinese government has shared information with the World Health Organization and released the gene sequence of the virus. It also held a video conference with more than 150 countries, including Canada and international organizations to share information, according to the release.

"We deeply thank the Canadian government and its people as they offered help to China after the outbreak. When Canada was in difficulties, China also offered support and help to Canada," read the release.

It noted that through sister cities, companies, and individuals, China has donated a large amount of medical supplies to Canada, which greatly helped its fight against COVID-19. "We should stick to the idea of building the community of a shared future and carry on our efforts in supporting Canada, and working with the international community to defeat the virus."

China's Consulate-General in Vancouver also noted that in recent months, there have been some racist incidents targeting Chinese people under the excuse of the COVID-19 epidemic. "We expressed sincere condolences to victims and strongly condemned such incidents. We hope local authorities could hold related people accountable."

Different people in Canada have lived in harmony and made joint contributions to Canada and there should be no place for racism in the country, the release said. The virus is a common enemy for all people, races and countries and stigmatization of any race does no good for the fight against the virus, it said.