CHINA China’s core concerns must be addressed by US in talks: MOFCOM

China’s core concerns must be addressed by US in talks: MOFCOM 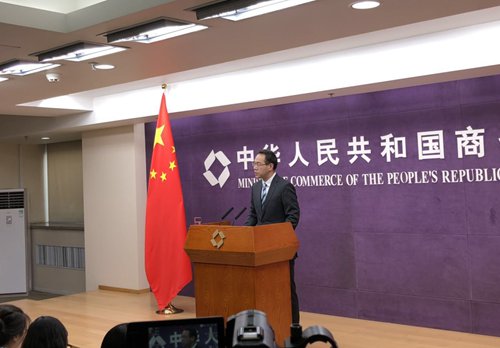 China and the US will resume trade talks, but China's core concerns must be addressed, and Beijing believes that there must be a way to address such concerns, the Ministry of Commerce said on Thursday.

"Through negotiations based on equality and mutual respect, each side's legitimate concerns will and can be addressed," Gao Feng, spokesperson of China's Commerce Ministry, told a press conference on Thursday.

Gao said at a May 16 press conference that China's core concerns include the removal of all US tariffs, a reasonable amount of purchases from the US and a balanced agreement. No further details were disclosed.

It was the second weekly press conference in a row, after the meeting between Chinese President Xi Jinping and US President Donald Trump during the G20 summit in Osaka, Japan, where little information was given to reporters about an anticipated resumption of trade talks, even though most of the questions involved those talks.

The stress on China's core concerns reflected US unwillingness to give ground on these issues, Song Guoyou, director of Fudan University's Center for Economic Diplomacy, told the Global Times on Thursday.

"If the US continues to refuse to address these concerns from China, China has reason to believe that the US is not sincere in the talks," Song said, noting that in that case, reaching a final agreement would be difficult.

"The US can lift the tariffs it put in place, but it wants to use these as bargaining chips in talks," Song noted, adding that China will hold firm on its demand.

On Tuesday, Chinese Vice Premier Liu He spoke with US Trade Representative Robert Lighthizer and US Secretary of the Treasury Steven Mnuchin via a telephone call. China's Commerce Minister Zhong Shan participated in the call.

The news of the phone call was disclosed in a brief statement on the MOFCOM website on Wednesday morning.

The US has made some positive gestures this week, but Chinese analysts are skeptical.

The US Department of Commerce said Tuesday (US time) that it would allow some US companies to resume sales of US-made products to Chinese telecom company Huawei, which was on its entity list.

The US also announced on Tuesday that it would exempt 110 Chinese products, including medical equipment and electronic devices, from a 25 percent tariff it imposed on $34 billion worth of Chinese goods in July 2018.

Gao said that the US move is in accordance with its own tariff exemption protocol and he didn't give a direct answer to a question on whether China will lift some tariffs on US imports in response.

As the commerce minister, the participation of Zhong is very natural, Gao said.