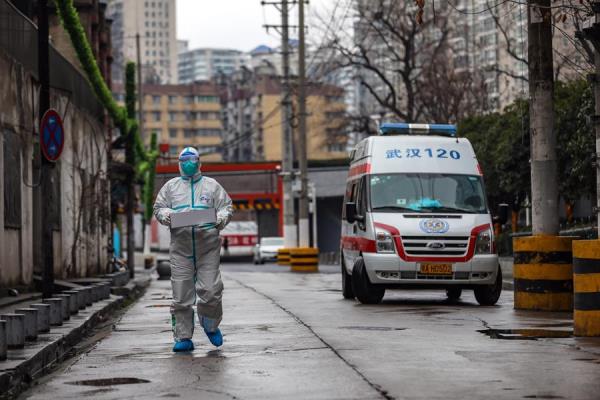 BEIJING, April 7 (Xinhua) -- China's response to the coronavirus outbreak has been responsible, with especially a good job of information and experience sharing, which makes a significant contribution to the global fight against the COVID-19 pandemic, according to experts.

Most notably, on Monday, in information and experience sharing, China released "Timeline of China releasing information on COVID-19 and advancing international cooperation on epidemic response", which chronicles the main facts and measures it has taken.

Christine Bierre, editor-in-chief of France's Nouvelle Solidarite magazine and an expert at Schiller France Institute, described China's attitude in its coronavirus response as "very responsible," and "exemplary," citing a rapid and continuous information sharing on the virus containment and treatment, which contributed to international cooperation and global fight against the virus.

"I think the attitude of China during this pandemic was very responsible," Bierre commented. Firstly, she said, China transmitted the virus' genome sequence to the main global health agencies "less than 10 days after the start of the epidemic," "so that everyone can cooperate in finding solutions."

"Then, its senior health officials, such as Zhong Nanshan, held numerous video conferences with specialists in Europe or other countries, to share their accumulated experience on screening tests and treatments," she noted, including the "continuous exchanges" between France and China regarding vaccines.

Moreover, the French expert praised China for providing assistance for other countries to support their anti-virus efforts.

After the COVID-19 pandemic was brought under control in Hubei province, she said, "China quickly began to send aid to many countries in Asia, Africa, and of course, Europe and the Americas."

"From March 1 to April 4, it exported a total of 3.86 billion masks to the world! France alone has ordered nearly 2 billion masks, most of them from China, as well as screening tests and respirators," she said.

"I think China's attitude has been, in fact, exemplary," the French expert noted.

"The Chinese government has been very forthcoming with information and keeping us updated day to day," said David E. Persse, public health authority and physician director of emergency medical services in the major U.S. city of Houston, when speaking of China's information sharing.

Commenting on China's response to the COVID-19 pandemic, Jon R. Taylor, professor and chair of the political science and geography department at the University of Texas at San Antonio, said, "China's central government was diligent by pursuing measures that were designed to protect people's lives."

"The central government made a hard decision, one that has had a profound impact on both the country and the world: temporarily shelving portions of the nation's economy in order to prevent the further spread of the virus," he noted.

The U.S. professor hailed the frontline Chinese medical workers as "heroes," without whose sacrifices, including the ultimate sacrifice of their lives, "the world could very easily be in the grasp of a health crisis of absolutely epic proportions."

"Their heroism will rightly be celebrated by a grateful country and planet," he said.

Francesco Maringio, president of the China-Italy Association for the Promotion of the Silk Road, regarded the release of the "timeline" as China's further contribution to international cooperation in the global fight against the coronavirus.

The principle of sharing is key to any medical or technical achievement in future in the global anti-virus efforts, he said, hailing the Chinese move as "a valuable input in the direction of crisis management by countries that are 'further behind' in terms of the spreading of the disease."

"It is an important contribution in information sharing," he noted.