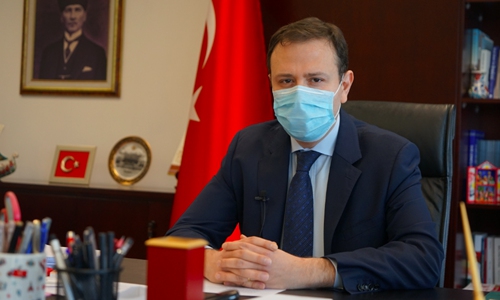 Overseas residents in China are lauding the timely dissemination of information and constant updates by the Chinese national health commission and the local governments, Sabri Tunç Angılı, Consul General of Turkey in Shanghai told the Global Times in an exclusive interview on Monday.

It really helps us as consulates to "share this information with our citizens" and inform them about the preventive measures they should adhere to, Angılı said.

The Consul General is happy to learn that not only the Shanghai municipal government but also provincial governments in the districts of Zhejiang, Jiangsu, and Anhui are providing daily information about the coronavirus.

Transparency is very important as this will ensure people don't fall for panic, anxiety and misinformation grip, he said. "I'm confident China will overcome this situation very soon."

On January 29, the Shanghai municipal government organized a meeting between all the consul generals in Shanghai and the local health commission. Officials from the local center for disease control and prevention also attended the meeting.

The Consul General expressed his gratitude to Chinese government for effective measures. Turkey sent a plane to evacuate 42 of its citizens stranded in Wuhan, Central China's Hubei Province on February 1. So far, none of them have been diagnosed with the virus.

"It couldn't have been possible without the help of the Chinese government, the Hubei provincial government and efforts of Turkish Embassy in Beijing," he said, adding that Turkey also donated masks and goggles to Hubei as an effort to combat the coronavirus.

The Consul General also shared some simple yet helpful tips, like washing hands timely, wearing masks outdoors, using salted water to rinse the mouth, among others.

"It's not my first time, actually, my previous posting was in Japan from 2008-2012," he said, recalling the massive 2011 earthquake, and the Fukushima Nuclear Power Plant disaster. He particularly mentioned the need for people to take safety measures seriously during the nuclear disaster as the radiation was extremely dangerous to people's health.

"My feeling is that both Japanese and the Chinese people are resilient; they are very meticulous to follow the rules and take necessary precautions," the Consul General noted.