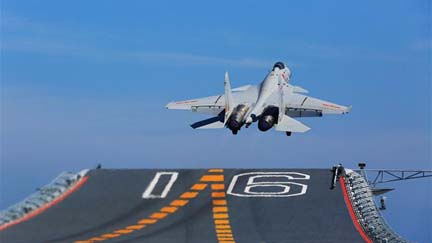 According to the white paper titled "China's National Defense in the New Era," China attends to both development and security. It is making an integrated effort to build a prosperous country and a strong military, and striving for the coordinated development of national defense and the economy.

Following the principle of building the armed forces through diligence and thrift, China takes into consideration the development of the economy and the demands of national defense, decides on the appropriate scale and composition of defense expenditure, and manages and applies these funds in accordance with law.

As the only major country yet to be completely reunified, and one of the countries with the most complex peripheral security environment, China faces serious challenges in safeguarding national sovereignty, territorial integrity, and maritime rights and interests, the white paper said.

China is moving closer to the center of the world stage, and the international community expects more international public security goods from the Chinese military, according to the white paper.

There is still a wide gap between China's defense expenditure and the requirements for safeguarding national sovereignty, security and development interests, for fulfilling China's international responsibilities and obligations as a major country, and for China's development. In step with national economic development, defense expenditure of China will maintain a moderate and steady growth, said the white paper.