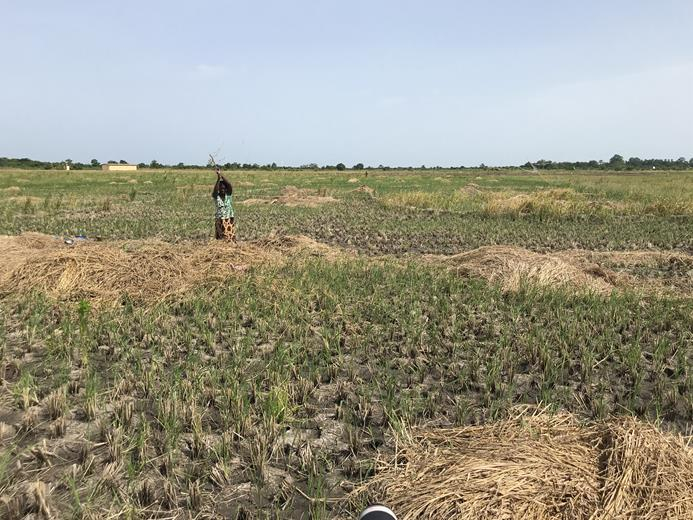 Simala Sinda Wedika never thought he’d one day work in a rice field as a farmer.

He used to be a construction worker and underwent the transformation when he and his colleagues finished building the Lome Agriculture Demonstration Center. The facility then took him in based on his outstanding work ethic.

Simala said he was very grateful to be part of the project. He had managed to grasp farming techniques for rice, corn and so on.

The demonstration center is one of the first of 15 such aid facilities established under the first China-Africa Cooperation Forum held in 2006. Completed in 2010. The center covers an area of 10 hectares, eight of which are for growing rice.

China’s Zhongmei Engineering Group won the bid among other Chinese competitors to build and operate the facility.

Simala is the most senior local employee at the demonstration center. He also has a growing number of apprentices.

He and his Chinese colleagues also go into the field to teach other farmers who need to increase rice production.

Besides transplanting skills, Simala is teaching them how to better prepare the field, repel birds and so on. Machinery is not suitable for local farmers because they can’t afford any. And they can only afford to hire one or two people to help. So their field management skills need some work.

The rice output at the demonstration center is at least three times larger than that of the local rice field.

The land fertility level is the same. So what makes the difference?

For example, rice seedlings cannot be planted too close to each other. But most local farmers used to ignore that. Besides, there is not enough irrigation to water the field enough, especially during dry seasons.

Huang is happy to see that their farming techniques have been adopted by the local people. And the Togolese central government continues to send students to the demonstration center to learn.

Simala is grateful that he has the chance to work on something meaningful. He hopes the cooperation can expand to other parts of the country where more hard-working people are ready to improve their farming skills.