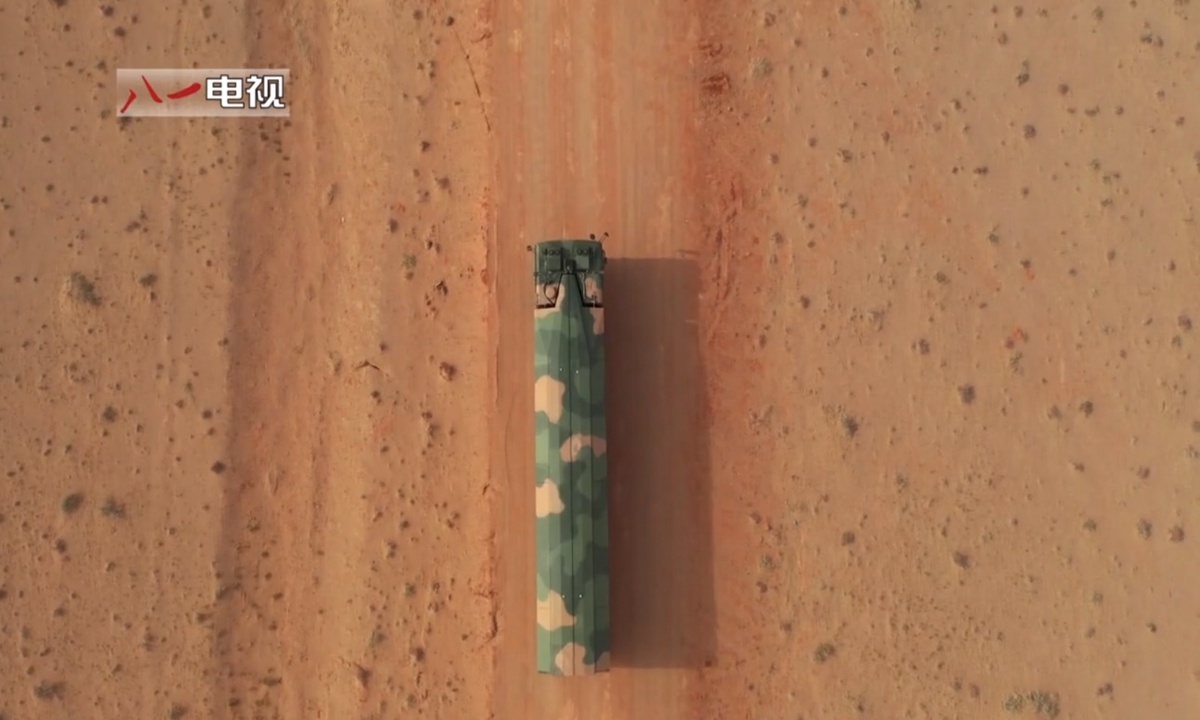 A transporter erector launcher of a missile in a desert. (Photo: Screenshot from 81.cn)

One of China's most advanced weapons, the DF-17 hypersonic missile, was seen in media reports to have received an upgrade that experts said on Monday can improve the weapon's capability to disguise itself from hostile reconnaissance and protect itself from complicated battlefield environments.

A previously unknown type of transporter erector launcher (TEL) of a missile was spotted by military observers in a video celebrating the fifth founding anniversary of the People's Liberation Army (PLA) Rocket Force on Thursday, released on 81.cn, the website of the PLA.

The TEL uses an integrated cover and encloses the missile within the camouflaged transporter as it runs on desert terrain, according to the video.

While the video did not specify the designation of the missile, Shanghai-based news website eastday.com identified it in a Saturday report as an upgraded version of the DF-17 hypersonic missile.

According to the speculations in the eastday.com report, the upgraded version is the complete form of the DF-17. When the missile made its public debut at the National Day military parade in 2019, the DF-17 did not have the cover and exposed the whole missile on the back of the TEL.

Covering the missile can help the missile disguise itself and protect it from external environments, Song Zhongping, a Chinese military expert and TV commentator, told the Global Times on Monday.

The fully camouflaged TEL can make itself more difficult to be detected by hostile aerial or satellite reconnaissance, and the missile within will not be affected by harsh weather conditions or complicated battlefield environments, as the road-mobile TEL traverses complicated terrains, analysts said.

A separate report by China Central Television (CCTV) on Thursday said that a new type of missile TEL recently received additional equipment so it can fully hide the missile within its cabin.

The CCTV report also did not identify the designation of the missile, nor did it give a glimpse of the missile, but said the missile made its debut at the 2019 National Day military parade. This could be additional evidence that the missile is the DF-17, observers said.

The first PLA Rocket Force missile brigade equipped with this type of missile recently conducted a fire assault exercise, the CCTV report said, noting that this brigade is now ready for combat.

Reportedly equipped with a hypersonic glide vehicle as its warhead, the DF-17 is a short to medium-range missile against which the no current missile defense system can intercept, analysts said.