China's digital currency likely to be highlighted at two sessions 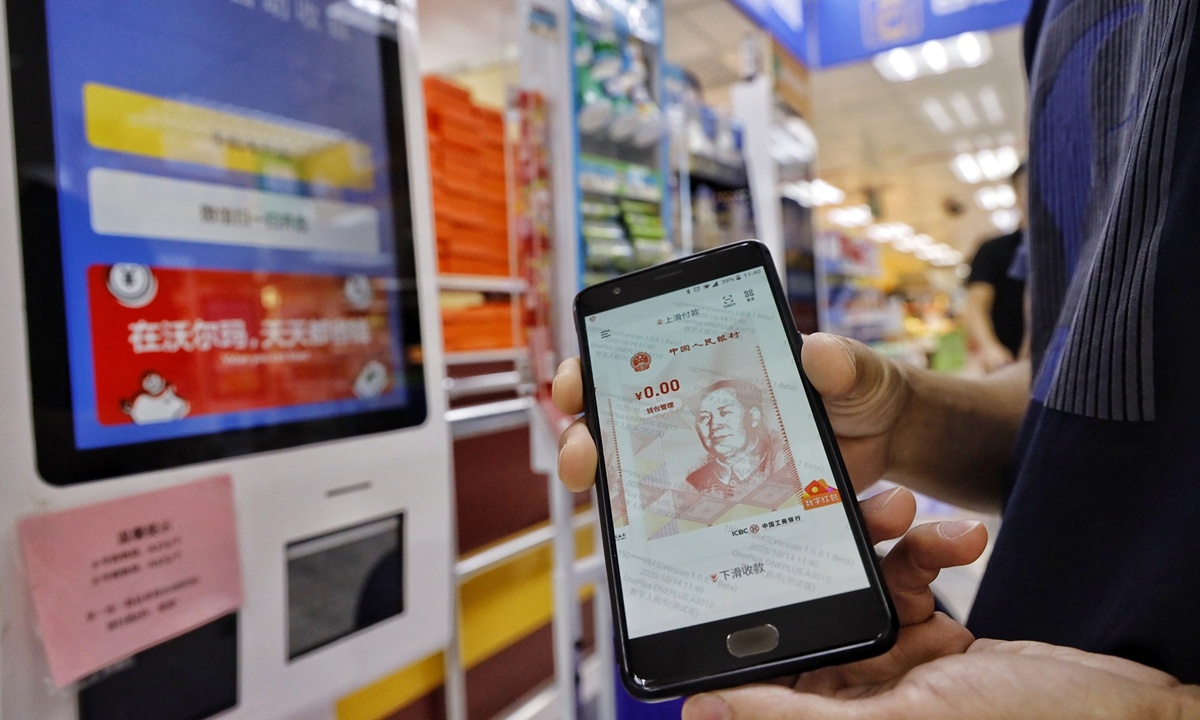 Residents who received "red packets" of digital RMB use the money in stores in Shenzhen, Guangdong Province, on Wednesday. The city launched a pilot program to distribute 10m yuan ($1.49m) in the form of digital currency to residents on Monday. (Photo: Global Times)

China's digital currency, which is now being tested in cities such as Shenzhen, Beijing and Shanghai, is expected to be highlighted at the forthcoming annual two sessions after being written into multiple regional governments' annual work reports.

"More research on cross-border businesses involving the digital currency could be done, and Hong Kong-invested companies in the Chinese mainland could be the first to undertake such trials," the NPC deputy told the Global Times prior to the two sessions.

Against the backdrop of a global race, other big cities in China - Beijing, Shanghai, Suzhou and Chengdu - have started large-scale tests of the digital yuan.

The capital city said its testing scenarios will focus on the 2022 Winter Olympics. To reach that goal, the Beijing Academy of Blockchain and Edge Computing and the Digital Currency Institute of the People's Bank of China - a division created by the central bank in 2017 - recently signed a cooperation deal to promote the application of the digital yuan, based on blockchain technology.

One of the benefits of adopting a national digital currency is to track the circulation of money more openly and digitally, which could help eradicate corruption, said Chen Chunxing, a National Committee of the Chinese People's Political Consultative Conference (CPPCC) member and deputy president of the Hubei Federation of Industry and Commerce.

"Many private companies expect the digital yuan to be introduced officially as early as possible, as it can make market competition more open and standardized," Chen told the Global Times on Tuesday.

The attention from NPC deputies and CPPCC members means the digital currency may be in the spotlight at the two sessions, but the country's top policy advisors are unlikely to drastically accelerate its development, because China wants the currency to be safe, so a good number of tests are required, Wang Peng, assistant professor of the Gaoli Academy of Renmin University of China, told the Global Times.

Instead, the agenda for the digital yuan may be proposed in conjunction with other fintech development plans, such as regulations on fintech giants like Ant Group and online lending platforms, Gao noted. "Against the backdrop of China's financial reform, the digital yuan will become an effective means to supervise fintech and online payment platforms."

Some Chinese commercial banks have taken the initiative to push forward the national digital currency, from hiring more talent to training staff and signing cooperative deals with gas stations, shopping malls and supermarkets for future applications.

According to a staffer surnamed Chen who works at the Agricultural Bank of China, the bank encouraged its employees to take part in the issuing campaign of the digital currency during the Spring Festival in Beijing. The campaign was held by e-commerce company JD.com in collaboration with other banks. Any lucky applicant could get 200 yuan of digital currency, to be used in designated shops.