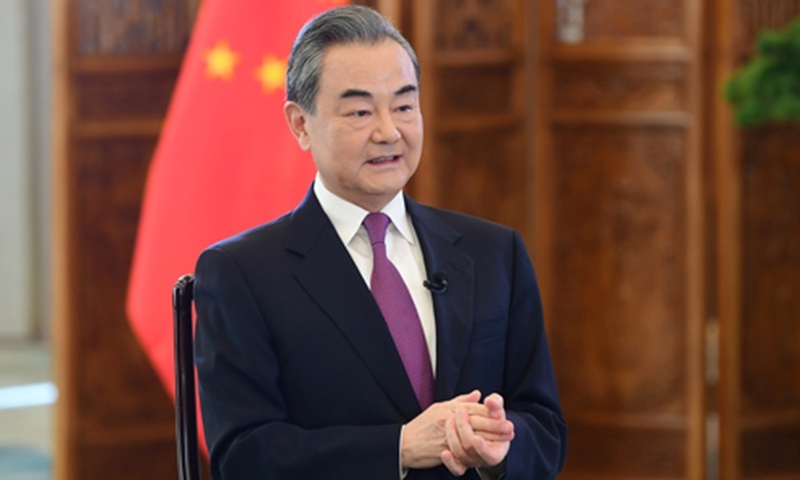 China's diplomatic relations with major foreign countries and regions in 2021 will be "positive but still challenging" with its rising international influence, diplomats and experts said.As 2020, an extraordinary year for China and the world, passed, and 2021 comes with new and long-lasting challenges, Chinese State Councilor and Foreign Minister Wang Yi shared his views on China's bilateral and multilateral cooperation with countries and international organizations including Russia, the US and EU, and introduced the focus of China's diplomacy in the new year.

Wang's remarks sent a strong signal to other countries, especially the new US administration, that China's foreign policy has always been continuous and stable as China always hopes to return to a mutually beneficial and win-win track, experts said.

China's relationship with the US has reached a "new crossroads" and a "new window of hope" is opening, hoping that the next US administration will return to a sensible approach, resume dialogue with China, restore normalcy to bilateral relations and restart cooperation, Wang said in a recent interview with the Xinhua News Agency and the China Media Group.

In 2020, "the sudden onslaught of COVID-19 has accelerated the once-in-a-century transformation in an increasingly fluid and changing world," said Wang, adding that "unilateralism, protectionism and power politics are standing in the way of international cooperation."

Wang noted that in recent years, China-US relations have run into unprecedented difficulties, but China's policy toward the US is consistent and stable. "We are ready to develop with the US a relationship based on coordination, cooperation and stability," he said.

"Even though China-US relations have taken a turn for the worse in recent years, China always hopes to return to a mutually beneficial and win-win track," Li Haidong, a professor at the Institute of International Relations of the China Foreign Affairs University, told the Global Times on Sunday. Li noted that China is hoping that the new US administration can understand and grasp this signal and not misunderstand China's attitude due to the unhealthy atmosphere in US society.

The most important implication is that the diplomatic relationship between China and the US is an interactive one, not one unilaterally defined by the US, Li said.

"No need to be pessimistic about bilateral relations in 2021," Li said. If the Biden administration understands China's determination to shape a healthy bilateral relationship and carry out a rational China policy, there is hope that the two countries can overcome the difficulties that the Trump administration has brought and reach cooperation in many areas that will positively affect long-term diplomacy.

Also, the relationship with the European Union has withstood the profound changes in the world in 2020, which marked the 45th anniversary of diplomatic ties between China and EU, Wang said.

"China and the EU are comprehensive strategic partners, not systemic rivals," Wang said. In 2020, China became the EU's largest trading partner for the first time. China and the EU announced the conclusion of negotiations on a China-EU investment treaty, adding fresh, strong impetus to China-EU cooperation.

The multilateralism that our two sides advocate must be dedicated to unity and cooperation rather than group politics, Wand said. It needs to transcend systemic difference rather than draw lines along ideology. China is prepared to enhance coordination with the EU to "keep our relations on the right track."

Wang's words indicate that the direction of cooperation between China and the EU is clear, but the process will be complex, considering the challenges facing the relationship in today's world, Cui Hongjian, director of the Department of European Studies, China Institute of International Studies, told the Global Times on Sunday.

"The framework for China-EU cooperation was set early and will not be compromised, namely the Belt and Road Initiative as the core to promote multi-party win-win cooperation, with connectivity as the goal," Cui noted. "But with China's international influence rising, its diplomacy will have to take on more challenges and costs."

Aside from the pandemic, the development of China-EU relations this year will have to face the impact of the Trump Administration's unilateralism and protectionism in the past few years, which is yet to be eliminated, the trend of counter-globalization, political changes and populism within the block, Cui said.

The overall relationship between China and the EU will be positive, and both sides will enhance cooperation in various fields, including mutual assistance in the fight against COVID-19, improvement of the supply chain, cooperation in environmental protection and in digitalization, and inviting third parties into multilateral cooperation, such as China-Europe-Africa projects, Cui said.

Cui believes the direction of China-EU relations will become clearer in 2021 after important points, including Biden assuming office and the Global Climate Change Conference which is scheduled to fall in November 2021.

The relations with Russia are also a major focus for China.

Wang said that China-Russia relations in 2020 have stood the test of the once-in-a-century pandemic and unprecedented global changes, and reached a "historic high" in all respects.

"Together, China and Russia will continue to be the example of good-neighborly and friendly relations between major countries, add impetus to global recovery, and underpin global strategic stability," Wang addressed.

"The China-Russia relationship is at its best in history, not because of current pressure from the US, but based on reciprocal demand and the fundamental interests of the two countries. From the end of the Cold War to the present, bilateral ties have experienced a series of changes in the international situation, but are increasingly solid," Yang Jin, an associate research fellow at the Institute of Russian, Eastern European and Central Asian Studies of the Chinese Academy of Social Sciences, told the Global Times.

But US suppression will definitely speed up China-Russia cooperation in the field of military and security, Yang said.

In 2021, the focus of China's diplomacy will not only be relations with Russia, the US and the EU but also with ASEAN and Africa.

Wang said China and ASEAN will celebrate the 30th anniversary of their dialogue relations in 2021 and further enrich the strategic partnership and usher in a new era of peace, development and cooperation for the region.

China and Africa will have China-Africa Cooperation meetings in Senegal this year, work together on the three priority areas of vaccine cooperation, economic recovery and transformative development to build new consensus on solidarity, break new ground for cooperation, and deliver new benefits to the people.