CHINA China's draft supervision law: What is it, why does it matter?

China's draft supervision law: What is it, why does it matter?

A draft law that would establish a new supervisory network across China came under the microscope at the National People's Congress (NPC) on Tuesday.

The proposed law, which would create a National Supervisory Commission, is part of significant institutional reform under deliberation at the first session of the 13th NPC.

Also on Tuesday, the State Council submitted a draft plan that would result in a broad restructuring of the government. 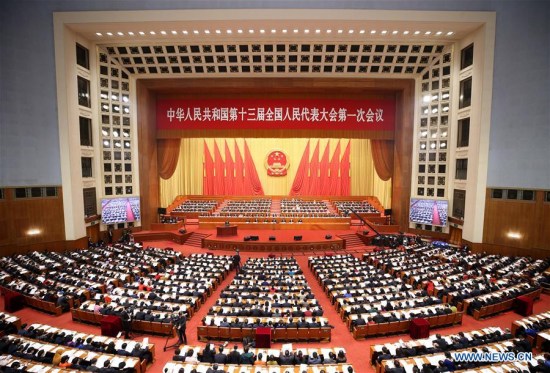 The fourth plenary meeting of the first session of the 13th National People's Congress (NPC) is held at the Great Hall of the People in Beijing, capital of China, March 13, 2018. (Photo: Xinhua)

What is the supervision law?

The reform would unify the Communist Party of China (CPC) and state supervisory systems, and is designed to serve as a guiding law against corruption and for state supervision.

"The reform of China's supervisory system is aimed at enhancing the Party's unified leadership over anti-corruption campaigns and covering all state functionaries," Zhang Yesui, spokesperson for the first session of the 13th NPC, said at a press conference on March 4.

The bill would create new supervisory commissions to handle job-related crimes, independently exercising supervisory power, and not subject to interference from the government, social organizations and individuals, Xinhua reported.

The commissions would be entrusted to oversee state functionaries, investigate corruption cases such as bribery, embezzlement and abuse of power, impose administrative penalties on corrupt officials, and hand criminal cases over to prosecutors.

- Guiding law against corruption and for state supervision.

How did the pilot reforms work?

Pilot reforms of the supervisory system began in Beijing, Shanxi and Zhejiang in December 2016 and were expanded nationwide in November 2017.

The first significant change after the establishment of supervisory commissions was an increase in the number of state functionaries under supervision, according to Xinhua.

In Beijing, the total number of officials under supervision increased from 210,000 before the reform to 997,000 as of December 2017, Zhang Shuofu, head of the city's supervisory commission, told Xinhua.

Tracking the progress of a law in any country is a complicated task – discussion, redrafts and votes are common practice. Preparing the groundwork for China's proposed supervision law has required additional procedure, including changes to the Constitution.

A further step was announced on Tuesday, when an institutional restructuring plan was put forward by the State Council. The Ministry of Supervision and National Bureau of Corruption Prevention would be merged into a National Supervisory Commission, under the draft plan on which a vote is scheduled on Saturday.

The final stages of the establishment of the new system will take place over the coming days at the first session of the 13th NPC, culminating in a vote scheduled for March 20.

Law revised based on the recommendations.

Why is the new law being proposed?

The new supervision law is designed to cut inefficiency and enhance the CPC's leadership over supervision.

"In the face of a tough and complicated situation, our existing supervisory institutions were clearly unable to meet the demands of the battle against corruption and the campaign to clean up the Party," Xinhua quoted Li Jianguo, vice chairman of the Standing Committee of the 12th NPC, as saying on Tuesday.

Since 80 percent of civil servants and 95 percent of leading officials are Party members, the tasks of CPC inspection and state supervision highly overlap, Li added

"The agencies, with their power divided and overlapping, did not function in harmony," Li said, adding that procuratorates, which not only investigate but also prosecute, were not under effective supervision.

Under the reform, supervision, corruption control and prevention divisions under the government and procuratorates would be merged, pooling anti-graft resources.