The People's Republic of China marked its 70th anniversary on Tuesday with a series of National Day celebrations at the heart of the country's capital. The massive events in Tian'anmen Square, including a military parade, mass pageantry, and a grand gala, were designed to be environmental friendly.

The 70-gun salute that kicked off the day's events incorporated pollution control technology, according to the Global Times. The result was that nearly zero emissions were created by the firing of the 56 cannon shells. 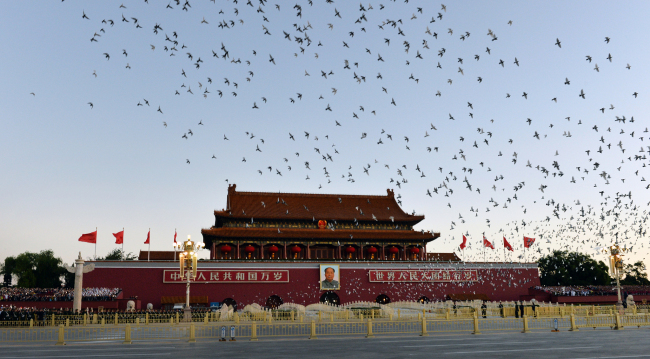 Pigeons are released during the celebrations marking the 70th anniversary of the founding of the People's Republic of China in Beijing on Tuesday, October 1, 2019. (Photo: VCG)

The parade concluded with the release of 70,000 "peace doves". They were contributed by local pigeon fanciers, who trained and volunteered their birds for the event, answering a call from the Beijing Carrier Pigeon Association.

These borrowed birds were trained to make their way home after their release in the center of the city. Some pigeon owners shared photos online of their returning birds.