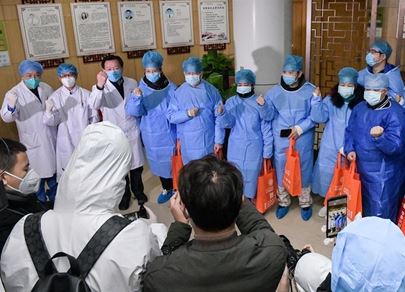 Officials and scholars from home and abroad have praised the efforts the central Chinese government has made in stepping up information openness and transparency during the fight against the novel coronavirus, despite smears from the US media.

In a Wednesday article, the New York Times said the Chinese government is implementing “information control” over the epidemic, which is contrary to the facts, said Shen Yi, director at the Research Center for Cyberspace Governance of Fudan University.

China’s quick public release of the gene sequencing of the virus last month won recognition from global authorities and scientists.

Peter Hotez, dean of the US National School of Tropical Medicine who has worked on vaccines for SARS and MERS, called this action “a game changer,” praising China for sharing crucial scientific information, wrote news outlet Politico.

Officials including Kenneth Mak, deputy director of medical services at Singapore’s Ministry of Health, and Kung Phoak, deputy secretary-general for ASEAN, also spoke highly of China’s timely information report on the virus to the WHO and international communities, People’s Daily reported Thursday.

During the virus outbreak, China has kept the public updated on the numbers of people being diagnosed with or recovering from the virus as well as the number of fatalities, with cases confirmed at 34,612 with 723 deaths nationwide as of 11:00 am Saturday.

The online real-time data platform built by People’s Daily and the medical science community dxy.cn that provides specific figures of infected cases in every prefecture-level city has been visited over 1.5 billion times so far.

The information offices of the central government and several regional governments including Shanghai, East China’s Zhejiang Province and South China’s Guangdong Province have organized press releases every day to inform the public of the latest situation of the epidemic.

The epidemic has generated heated discussed on social media as well. Nine out of 10 top trending topics on China’s Twitter-like Weibo were discussions related to the virus on Friday.

For netizens who say they or their family members need medical support, Weibo has created a hashtag #InfectorSeekHelpOnline for them to report their situation.

There have been over 19,000 posts with this hashtag by Friday. The government has set up a specialized channel to contact, verify and help them, said Weibo administrators.

This is opposite to the Times’ claim of China “cracking down” on virus-related information online. “Weibo never deletes any authentic help-seeking post in this period,” Shen told the Global Times.

People’s understanding of the novel coronavirus is deepening with time, which leads to their distinct response to the epidemic in different periods, observers said.

Governments at different levels are attempting to improve information transparency during the gradual process of knowing about the virus, said Zhou Qing’an, deputy dean of the School of Journalism and Communication at Tsinghua University.

Central China’s Hubei Province, where the virus first emerged at a seafood market in capital city Wuhan in December 2019, was dubbed the epicenter of the epidemic with 24,953 confirmed cases and 699 deaths as of 11:00 am Saturday.

Wang Xiaodong, the governor of Hubei Province, apologized to the public via a local press release on January 26, saying he felt “deeply guilty” about the virus outbreak.

Two days before that, the State Council announced it would severely punish officials who cover up information about the epidemic.

The central government invited the public to report any hiding of information by officials by leaving an online message on a supervision platform the State Council built specifically for the epidemic on WeChat. Both real-name and anonymous reports are acceptable.

To date, several officials in China’s various regions including Hubei, Hebei, Hunan and Zhejiang provinces have been reportedly removed, suspended, fined or given a demerit for concealing information or reporting it late.

Wuhan government released a statement on Tuesday that dispelled a rumor saying all the supermarkets and pharmacies in the city would close within three days, which had made many citizens anxious.

“They are open as usual,” said the statement.

The Chinese government’s efforts in clarifying rumors, however, were twisted into a “strategy for information control” in the Times’ coverage, which is groundless and biased, Shen said.

“Some US media are ideology-oriented, sticking to their values and positions instead of the facts,” Shen told the Global Times.

Compared with their “earnest attention” to the breakout of the novel coronavirus in China, mainstream US media coverage of US domestic epidemics including measles and flu are barely seen, he added.

China’s actions in fighting against the virus should be judged by scientific evidence and professional organizations like the WHO instead of the foreign media, Shen said.

The WHO praised the dramatic measures that China has taken to rein in the virus outbreak, AFP reported Tuesday.

In the meantime, it criticized some governments of wealthy countries for not providing comprehensive and detailed information about their virus cases.

“Some high-income countries are well behind in sharing this vital data with the WHO. I don’t think it’s because they lack capacity,” WHO chief Tedros Adhanom Ghebreyesus said Tuesday.

By contrast, what the central Chinese government has done so far in terms of keeping information open and transparent is unimpeachable, Shen said.