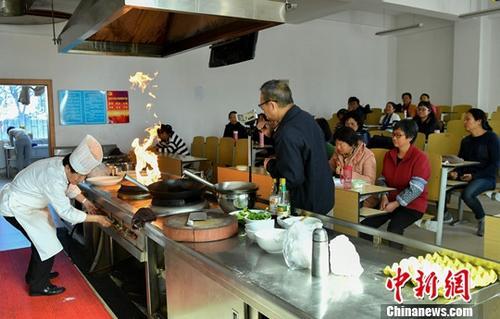 Bored with retirement, China’s elderly population is seeking new ways to make their lives colorful. Some are now taking the proverb “live and learn” to heart and are now lining up to attend college during their golden years, China News Service reported.

In Liuzhou, China’s Guangxi Zhuang Autonomous Region, a college for the elderly is having their last day of spring semester and its summer semester will start soon.

Ou Weiji, a senior student, has studied at this school for ten years.

“I majored in calligraphy, and have taken lessons on pen drawing, traditional Chinese painting and ancient inscriptions,” Ou said with a smile. “I’m taking ink painting course next semester.”

The university has a large population of elderly students who are passionate about their education. According to the vice principle of the school, the college opened in 1987 with roughly 70 students in two classes. Now it offers more than 200 classes and has nearly 10,000 students.

College courses for the elderly is becoming popular across the nation. In fact, some colleges in Shanghai, Hubei Province, and Jiangsu Province are so popular enrollment is limited and applicants are sometimes turned away.

These students are so eager to attend these schools that some stay up until midnight when open enrollment begins to secure their place in line.

According to a Chinese association of educators for senior citizens, there are currently more than 62,000 elderly universities in China with more than 8 million enrolled students.

Programs offered at these institutions include vocal music, dancing, instrumental music, English, computer and technology use, photography, calligraphy, culinary, and Chinese medicine. Tuition ranges from 280-600 yuan for each major.

The Chinese government has stated that it sees elder education as a way to keep the aging population healthy, mentally active, and socially engaged.

Education for seniors has been included in China's development plan. It is expected that by the year 2020, there will be at least one university for the elderly in every county.