China has experienced its first electricity consumption peak of the summer, with national daily use at a record due to the rapid pace of manufacturing activities and a heat wave across the country. The load of at least 11 provincial-level power grids reached new highs over the past week. 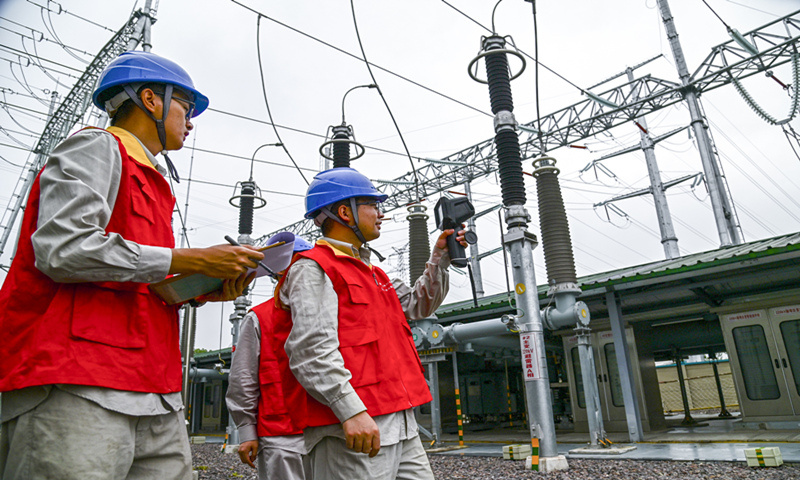 Workers check equipment at a power station in Jinhua, East China's Zhejiang Province on Monday to ensure stable operation. To meet high demand for power, China produced 3177 billion kilowatt-hours of electricity from January to May, up 14.9 percent year-on-year. Photo: VCG

However, despite the surging demand, China has abundant ways to cope, including the government's trans-regional coordination and high-tech measures such as robot inspection, to ensure power supplies - just as it managed to do over the past decades, analysts and industry players said.

According to a report on Sunday by state broadcaster China Central Television (CCTV), the national daily electricity use set a new record on Wednesday, reaching 27.187 billion kilowatt hours (kWh), up more than 10 percent from the peak last summer.

Electricity consumption also increased more than 4.7 percent compared with the extreme cold wave at the beginning of this year. The heat wave also pushed some of China's biggest industrial bases' electricity use to unprecedented levels.

Amid the record consumption, efforts are also underway to ensure steady supply.

Local workers in Zhejiang are trying to ensure smooth power supplies by using an insulated arm truck robot, which can enable workers to operate on the ground to complete installation work, according to media reports.

The load of the provincial-level power grid in China - equivalent to almost five times the energy produced by China's largest hydropower station, the Three Gorges - has surpassed that of Germany, the largest industrial country in Europe.

Power demand has mainly been affected by weather factors, compounded by rapid economic development, which caused a significant increase in electricity loads since mid-July - the arrival of the first wave of peaks, Zhu Weijiang, deputy director of the National Electric Power Dispatching Control Center, told CCTV.

In the current peak of consumption, the regional power grids in East China and Central China, as well as 11 provincial-level power grids in Guangdong, Jiangsu, Zhejiang, Anhui, Fujian, Jiangxi, Shaanxi and Guangxi, have all hit record highs, Zhu said.

In order to ensure power during peak periods, the State Grid has stepped up transmission across regions, and the cross-regional power transmission capacity during the peak period exceeded 100 million kilowatts for the first time, added Zhu.

So far, power supply is stable and orderly, which can guarantee that demand is met during the peak summer period, the official said.

Peak electricity demand in China often occurs in July and August due to the heavy use of air conditioners and activity at industrial facilities, Han Xiaoping, chief analyst at energy industry website china5e.com, told the Global Times on Sunday, adding that the heavy electricity use is due to the catch-up growth of factory demand as the manufacturing sector recovers from the COVID-19 epidemic.

Han said that responses to future demand surges may still include asking some factories to curtail electricity use, adding that this is a temporary and common approach used during peak periods.

Media reports have said that factories in Guangdong Province were told by local authorities to curtail their electricity use - for instance, some said they had to stop work for two days a week, which affected their daily production.

However, manufacturers told the Global Times that the situation only occurred once over the past two months, and now their operations are all going smoothly.

"We have not seen any notice asking us to curb electricity use so far, and all is running smoothly," a factory owner surnamed Zhao in East China's Jiangsu Province told the Global Times on Sunday.

"Electricity consumption is getting higher and higher as a source of energy. It is estimated that electricity will account for 90 percent of primary energy use in 2060 in China," Han said.

At present, 60 percent of China's electricity is generated by fossil fuels, while 40 percent comes from renewable sources, Han said. The growth of renewable energy will also accelerate with China's clean energy push, according to Han.