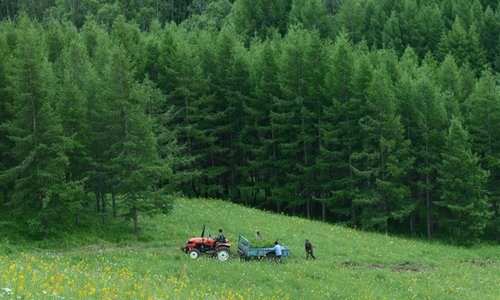 China's Saihanba afforestation community on Dec. 5, 2017 was announced to be one of the top winners of the annual UN Champions of the Earth Award for its outstanding contribution to restoration of degraded landscapes, amid the national efforts to advance ecological civilization.Photo: Xinhua

China's endeavor to build itself into a beautiful country, which has been defined by President Xi Jinping as a goal to be met by 2035, contributes to promoting ecological development for the world and has won acclamations from the international community.Adding dimension to domestic policyAn environmental focus was incorporated into the country's development plan mapped out in the report delivered by Xi at the opening session of the 19th National Congress of the Communist Party of China (CPC) in October, an unprecedented move suggesting the country's determination to "provide more quality ecological goods to meet the people's ever-growing demands for a beautiful environment.""The modernization that we pursue is one characterized by harmonious coexistence between man and nature," Xi said.In his speech, Xi vowed to promote green development, solve prominent environmental problems, intensify the protection of ecosystems, and reform the environmental regulation system.Ibrahim Thiaw, deputy executive director of the United Nations Environment Program (UNEP), told Xinhua in a recent interview that the congress "was a landmark because the leadership come out strongly to speak about not only social and economic issues, but also environmental issues.""What we have seen recently in China is a very clear direction from the leadership that air and water pollution should not result in fatality and can be addressed with clear policy. We have seen the Chinese president and government adopt very clear positions and policy to help deal with pollution," Thiaw said.Given China's status as the world's second largest economy and its political influence and leadership role around the world, China's adoption of domestic polices in regard to the environment has global implications, he added.Offering experience to global developmentChina has set prominent examples of successful practices concerning environmental governance, a recent case being Chinese individuals and company garnering half of the United Nations' highest awards on environmental protection this year.In December, the UNEP honored six inspirational environmental leaders with the Champions of the Earth award in Nairobi, Kenya. The Saihanba Afforestation Community from China's northern province of Hebei was awarded for transforming degraded land into a forest covering 92,000 hectares, preserving and purifying huge volumes of water for major cities in northern China and spurring green sector growth."The Saihanba Afforestation Community have transformed degraded land into a lush paradise -- part of a new Great Wall of vegetation that will play a part in helping protect millions from air pollution and preserving precious water supplies," said Erik Solheim, executive director of the UNEP.The community's work has proved that environmental degradation can be reversed, and that this is an investment worth making, Solheim added.On the market side, China's bike-sharing company Mobike Technology Co. was awarded for exploring market-driven solutions to air pollution and climate change.The World Wildlife Fund calculated that as of August 2017, Mobike users alone had collectively pedaled some 5.6 billion km, cutting more than 1.26 million tons of carbon dioxide emissions.Solheim said the award to Mobike shows the private sector can make a healthy profit while at the same time making huge improvements to people's lives and the environment."It proves that environmental challenges are not problems, but opportunities. This work is an inspiration to China and the world," he said.Mobike has already entered cities in Italy, Britain, Japan, the United States, Malaysia, Singapore, Thailand and South Korea, and is venturing out to the Latin American market.At the technological front, China has been offering expertise and experience in smart, green innovation to the larger world for a harmonious coexistence of nature and mankind.Claudia Assmann, deputy program officer of the UNEP, said that after years of efforts, China is on a good track of green development, especially in the areas of electric transport, solar energy and the "sharing economy."Shouldering responsibility for international cooperationAs an important participant, contributor, and torchbearer, China is taking a driving seat in global cooperation to tackle ecological issues.China is one of the first countries to have ratified the Paris Agreement, and has more than met its carbon emission reduction goals last year, exemplifying a responsible stakeholder's role in global efforts to fight against climate change.Achim Steiner, administrator of the United Nations Development Program, said the agency and China share many common visions in global cooperation.Miroslav Lajcak, president of the United Nations General Assembly for the 72nd session, praised China's job in establishing an assistance fund for South-South cooperation in support of developing countries' efforts to implement the agenda.In 2015, China pledged a package of 3.1 billion U.S. dollars to the South-South Cooperation Fund on Climate Change for developing countries.One country alone cannot address challenges for all. Besides China's endeavors, Xi also called for concerted efforts of the world to protect the planet."We call on the people of all countries to work together to build a community with a shared future for mankind, to build an open, inclusive, clean, and beautiful world that enjoys lasting peace, universal security, and common prosperity," Xi said in the report to the 19th CPC National Congress.