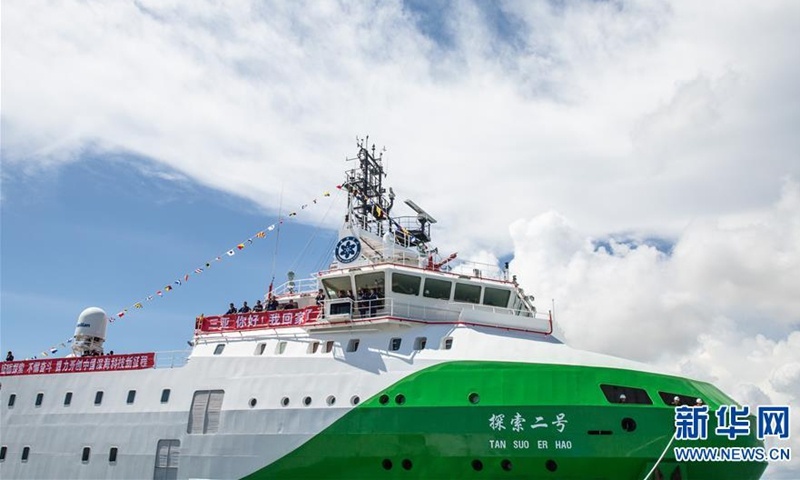 China's scientific research ship Explorer 2 has completed all its research missions in the Mariana Trench, and the manned submersible it carried has completed its 100th dive of 2020, setting a new record of 12 dives in eight days, with an average underwater time of eight hours and 27 minutes. It is also the first time in the world that a diving operation of such high frequency has been conducted.

During the joint operation with the 10,000-meter manned submersible Fendouzhe, the Explorer 2 carried the China Media Group's Canghai, a deep sea lander equipped with high definition cameras, which successfully docked with the Fendouzhe on the ocean floor, according to CCTV News.

The headquarters of the China Media Group successfully used domestic Ultra High Definition 4K technology to carry out the world's first real-time 4K video broadcast on the seabed at a depth of 10,000 meters.

The Explorer 2 research vessel continued its mission in the fore-arc area of the Mariana Trench after completing joint operations with the Explorer 1.

In addition to carrying the Canghai lander, the Explorer 2 also carried another manned submersible developed by China, the Shenhai Yongshi.

Through several dives, the Shenhai Yongshi made close observations of the seafloor in the Mariana Trench and acquired a large amount of scientific data and samples, accumulating valuable information for further understanding of the geological structure of the area.

Du Mengran, associate researcher of the Institute of Oceanology of Chinese Academy of Sciences, who is also the scientist who dived with the Shenhai Yongshi, told the media that through continuous dives, night dives, and dives at more extreme sea conditions than their international counterparts, the team has continuously reduced operating costs and improved the operational efficiency of the Shenhai Yongshi and provided the Fendouzhe with very valuable technology and experience.

With the Shenhai Yongshi's 325th dive, the Explorer 2's expeditions in the Mariana Trench are now completed. The ship's 60 crew members are on their way back to Sanya port, South China's Hainan Province.