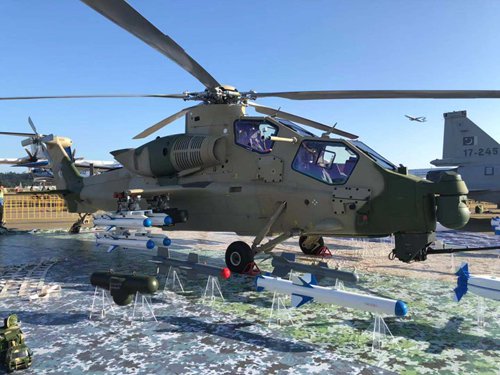 China's made-for-export attack helicopter Z-10ME is equipped with a new infrared depressor that renders it more capable of evading enemy missiles, according to its manufacturer.

Among several selling points including a sand filter, bullet-proof armor and crash resistance seats for pilots, it also boasts an infrared depressor, the report said.

The infrared depressor was recently developed, according to a statement from the helicopter's manufacturer Aviation Industry Corporation of China (AVIC) released on Wednesday.

AVIC said that the biggest threat a helicopter faces on the modern battlefield is infrared homing missiles, which can lock on an aircraft's emitted infrared radiation.

The suppressor is capable of greatly reducing that radiation, making the helicopter invisible to infrared homing missiles, the statement said.

The six-ton-class Z-10ME can fly with high maneuverability at very low altitudes, making it able to provide strong firepower while maintaining high survivability, reads a separate statement AVIC sent to the Global Times.

It can carry various types of guided and unguided air-to-air and air-to-ground munitions and is capable of fighting at both day and night, the company said.

Military experts said that many countries in the Middle East, Southeast Asia and South America are in need of medium-size attack helicopters cheaper than the US-made AH-64 Apache but with sufficient firepower, which makes the cost-effective Z-10ME a favorable choice.

A Z-10ME was on exhibit at the Airshow China 2018 in Zhuhai, South China's Guangdong Province in early November.