Activity in China's factory sector accelerated at the fastest pace in nearly a decade in October as domestic demand surged, a private business survey showed on Monday, adding further momentum to an economy that is quickly recovering from the coronavirus crisis. 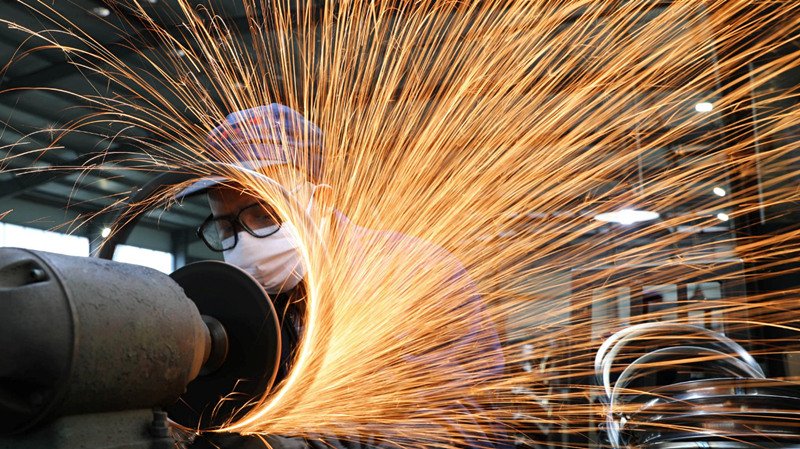 A worker wearing a face mask works on a production line manufacturing bicycle steel rim at a factory, as the country is hit by the novel coronavirus outbreak, Hangzhou, Zhejiang Province, China, March 2, 2020. /Reuters via CGTN

The Caixin/Markit Manufacturing Purchasing Managers' Index (PMI) rose to 53.6 from September's 53.0, with the gauge staying above the 50-level that separates growth from contraction for the sixth consecutive month.

Analysts polled by Reuters had forecast the headline reading would remain steady at 53.0.

China's vast industrial sector is steadily returning to the levels seen before the pandemic paralyzed huge swathes of the economy early this year, though the global outlook is dimming as many Western countries battle still rising COVID-19 infections and go back into virus lockdowns.

October's PMI reading was the highest since January 2011.

Pent-up demand, stimulus-driven infrastructure and surprisingly resilient exports have propelled the manufacturing rebound. Consumption, although hit hard earlier in the year, has also recovered in the third quarter.

"Recovery was the word in the current macro economy, with the domestic epidemic under control. Manufacturing supply and demand improved at the same time," Wang Zhe, senior economist at Caixin Insight Group, wrote in a note accompanying the survey release.

While the Caixin survey showed total new orders surged to the highest level since 2010, the gauge for new export orders fell from the month before, though it remained in expansionary territory.

"The second wave of coronavirus infections in Europe and the third wave in the U.S. have significantly suppressed China's overseas demand," Wang said.

The private survey also showed Chinese factories hired workers for the second month in a row, though the increase was slight.

Factory output also rose slightly from the month before, while a gauge of business confidence rose to a multi-year high.

The pandemic has been largely controlled in the world's second-largest economy, although a local outbreak emerged recently in the western region of Xinjiang.

The Caixin survey focuses more on small and export-oriented firms while China's official survey, which was released on Saturday, largely tracks large companies and state-owned enterprises.

The official gauge showed factory activity expanded at a slightly slower pace in October but it was slightly above analysts' expectations.

"There are still many uncertainties outside of China, so policymakers need to be cautious about normalizing post-coronavirus monetary and fiscal policies," said Wang.

Analysts expect China's economy to grow about 2 percent in 2020, the weakest since 1976 but still far stronger than other major economies.