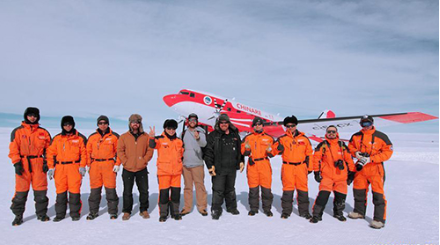 China's first fixed-wing aircraft for polar flights successfully landed in the peak of the Antarctic's inland icecap for the third time on Friday, showing the country's expedition and logistical support in Dome A has entered a continuous and systematic state.The Snow Eagle 601 landed at the Kunlun Station, 4,090 meters above sea level near Dome Argus (Dome A), the peak of the Antarctic's inland icecap, the Xinhua News Agency reported on Friday. Snow Eagle 601 was customized for the Chinese Antarctic expedition, especially long-distance inland expeditions. It landed at the Kunlun Station Airport twice on January 8 and 17, 2017, Xinhua reported."The success of the third landing shows that China's expedition and its logistical support in Dome A are in a continuous and systematic state, and China's expedition capability in the Antarctic has reached a new level," Dong Yue, vice dean of School of Law of the Ocean University of China, told the Global Times on Sunday. Dong said the successful landing will help China establish a special protection zone in Dome A for the Antarctic's environment.Dong said China needs to further strengthen the construction of infrastructure in the Antarctic to increase the number of fixed-wing aircraft and airports in the region, and the related investment plan has been included in the 13th Five-Year Plan (2016-2020).