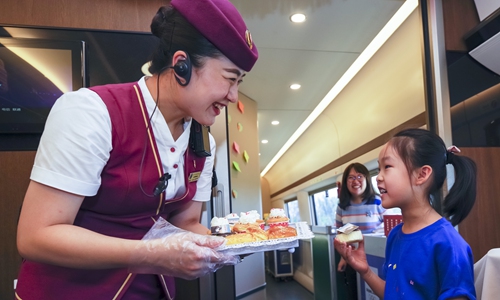 A crewmember on the G7 train from Beijing to Shanghai presents cakes to passengers on the 8th anniversary of the opening of the Beijing-Shanghai High-Speed Railway, on July 1, 2019. (Photo: cnsphoto)

Beijing-Shanghai High-Speed Railway Co (BSHSR) on Thursday closed its debut on the Shanghai Stock Exchange at the daily trading limit, marking a bullish start to the company's listing.

The listing signifies a new wave of railway capitalization.

Following the 10 am opening bell, the company's stocks jumped 43.24 percent to 6.99 yuan ($1.01) per share before their trading was temporarily closed.

BSHSR, the operator of China's most lucrative rail route, filed to list in Shanghai on Tuesday and drew high expectations of its potential growth. The company officially launched subscriptions on January 6, with shares priced at 4.88 yuan.

12.21 million households made valid applications for online issuance and the lottery success rate was just 0.79 percent, according to the Shanghai Stock Exchange. About 2.34 million winning numbers were released.

The firm, established in 2007, has been profitable for five consecutive years since 2014, according to the China Railway Group. Industry analysts said BSHSR runs the most profitable high-speed railway lines in China.