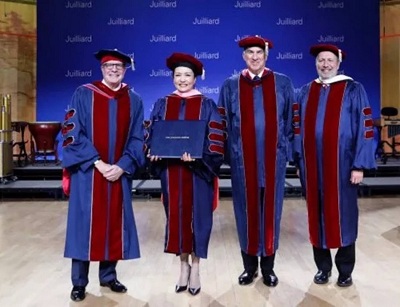 China's first lady Peng Liyuan received the honorary doctorate degree from Juilliard School on December 6, 2017, according to the official website of China Conservatory of Music.

The awarding ceremony was held in China Conservatory of Music, Beijing, where Ms Peng graduated.

Juilliard School, located in the city of New York, United States, is one of the world's pre-eminent performing arts conservatories.

Joseph W. Polisi, the President of Julliard highly praised Professor Peng's art achievements at the ceremony and noted that music can bring people from different cultures closer. Julliard School would serve as a cultural bond between the US and China, he said.The school is expected to open a campus in China's Tianjin in 2018.

Peng expressed her hope that music should build more bridges linking the two peoples and called for deeper cooperation and exchanges between art schools and institutions in the two countries.