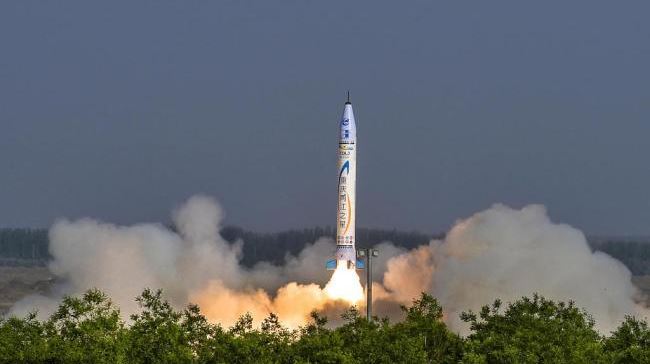 OS-X suborbital rocket designed by One-Space Technology roars into the sky at an unknown test base in northwestern China on May 17, 2018. (Photo: China Plus)

The company told Xinhua on Friday that their production base, with research and development (R&D) functions, opened last Wednesday.

The company's TQ-12 rocket engine and the ZQ 2 liquid-propellant carrier rocket will start production at the base in 2019. The ZQ 2, to be powered by the TQ-12, is scheduled to be launched in 2020.

"Having a manufacturing base is the first step for large-scale commercial production of carrier rockets and engines, and is expected to greatly accelerate the R&D and testing of our products," said Zhang Changwu, CEO of the company.

"Our goal is to produce liquid-propellant carrier rockets that feature innovative technologies, competitive prices and performance that can match global counterparts," Zhang said.

The Chinese government encourages the participation of private enterprises in the space industry. The country now has more than 60 private companies in the commercial space industry.