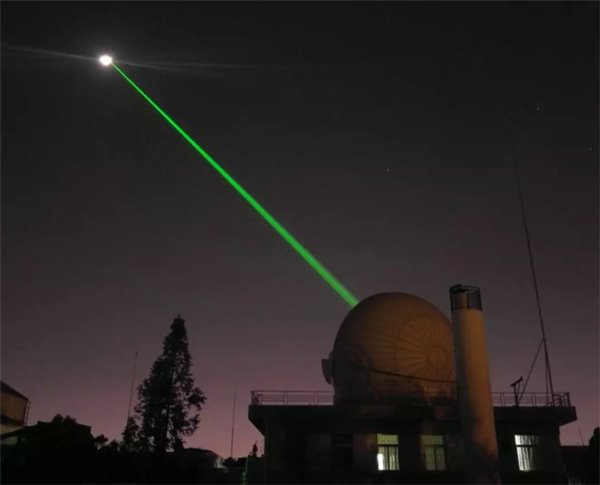 China has accomplished its first successful Lunar Laser Ranging (LLR), with a 1.2-meter telescope laser ranging system.Based on the signals of laser pulses reflected by the lunar retro-reflector planted by the U.S. manned mission Apollo 15, the applied astronomy group from the Yunnan Observatories measured the distance between the Apollo 15 retro-reflector and the Yunnan Observatories ground station to be 385823.433 kilometers to 387119.600 kilometers, from 9:25 p.m. to 10:31 p.m. Beijing Time, on Jan. 22, 2018.Theoretically, LLR measures the distance between the Earth and the moon by calculating the time a laser pulse takes to travel from a ground station on Earth to a retro-reflector on the moon and back again. LLR technology traverses fields such as laser and photoelectric detection, automatic control and space orbiting. Compared to other methods, LLR can achieve the highest accuracy of distance measurement between the Earth and the moon. "Although LLR in China has not achieved the same level as pioneering countries like the U.S., our initial success still means the progress, which started from scratch," said Li Yuqiang, an associate researcher with Yunnan Observatories. Results of LLR are vital to advanced research in astro-geodynamics, Earth-moon system dynamics and lunar physics. Until China made its first LLR, only the United States, France and Italy had successfully harnessed the technology. The LLR was conducted in the context of China preparing to launch the Chang'e-4 lunar probe in 2018. The lunar probe will undertake the first soft landing on the far side of the moon, conduct in-situ and roving detection, as well as relay communication at the Earth-moon Lagrangian 2 (L2) point. "In the near future, China will plant its own retro-reflector on the moon, which will further boost the development of LLR in China," Li said.