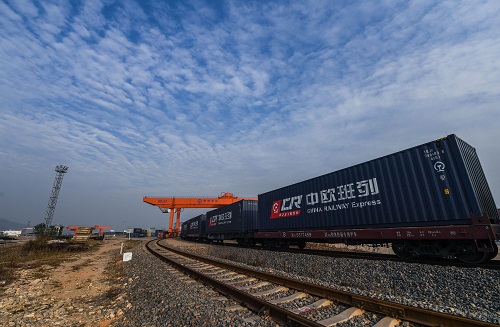 VILNIUS, April 12 (Xinhua) -- The first train of a new postal rail service to Europe, loaded with much-needed medical supplies, arrived early Sunday in Vilnius, according to the Chinese Embassy in Lithuania.

Launched by Southwest China's Chongqing Municipality, it is the first of its kind to Lithuania. The rail service aims to meet the rising demand for international parcel delivery amid the COVID-19 pandemic.

The ambassador highlighted that the service came "at the critical moment when the world joins efforts to combat the COVID-19 pandemic."

Departing from Chongqing on April 3, the "China Post" CR Express 1st block train carries 44 TEUs of relief supplies and parcels, which will be transferred later to other European countries.

Following the first postal train, seven more bound for Lithuania are scheduled to depart in the near future.

As of the end of March, the China-Europe cargo trains operated from Chongqing have provided postal service to 36 European countries since 2014.