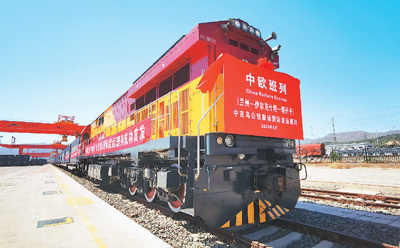 "In the face of adversity, foreign trade enterprises have seized the opportunity to take the lead in resuming work and production, met global product demand, and formed a strong support for exports," said the person in charge of the General Administration of Customs of China while analyzing the foreign trade situation in the first five months of this year.

According to a joint survey conducted by the Ministry of Commerce and the China Export & Credit Insurance Corporation, from February to March this year, 60 percent of enterprises' business negotiations were postponed or cancelled, and 37 percent of enterprises were at risk of having their foreign supply chains disrupted or interrupted.

Policy-oriented export credit insurance has played an important role in resolving such risks. For instance, in the first five months of this year, in terms of expanding insurance coverage, China Export & Credit Insurance Corporation provided services for 89,000 small and micro enterprises, an increase of 23 percent over the same period last year, exceeding the level for the whole of 2019.

Facilitation measures provided by customs authorities have also been an invaluable source of support for foreign trade enterprises.

In order to help processing trade enterprises resist the impact of the epidemic, Shantou customs authorities in south China's Guangdong province took the initiative and made efforts to quickly handle online declarations and other procedures, simplifying seven business documents and procedures.

Analysts believe that in the face of the epidemic, people from all walks of life in China have joined forces to help foreign trade enterprises "sail against the current".