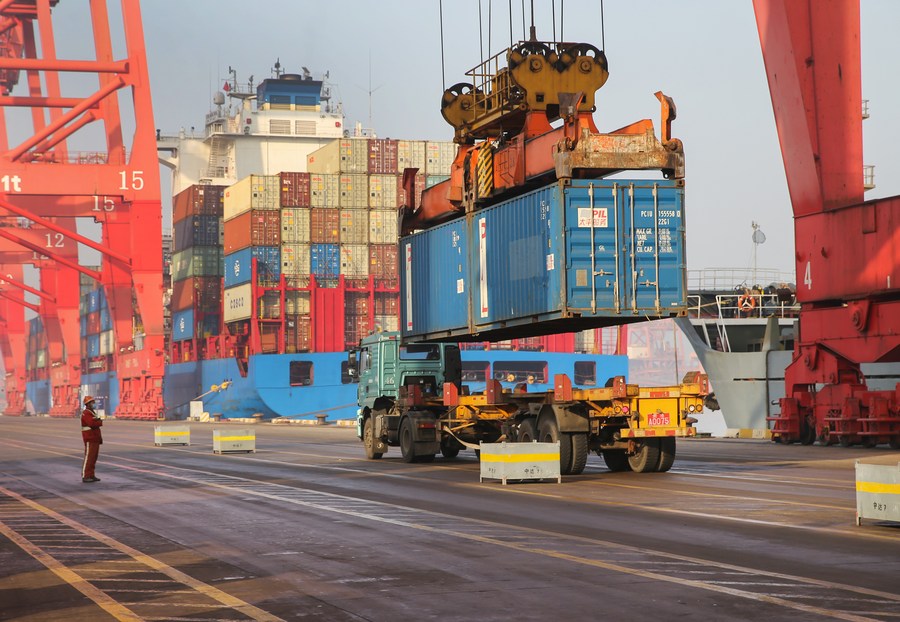 Cargos are unloaded from a container ship at the container terminal of the Lianyungang Port in East China's Jiangsu province, on Jan 14, 2021. (Photo: Xinhua)

This marks an increase of 21.8 percent from the pre-epidemic level in 2019, the General Administration of Customs said.

The trade surplus increased 149.7 percent to reach 1.02 trillion yuan in the January-April period.

The country's imports and exports totaled 3.15 trillion yuan in April alone. This marks a year-on-year increase of 26.6 percent and month-on-month growth of 4.2 percent.

In April, the trade surplus narrowed 12.4 percent from a year earlier to 276.5 billion yuan.

Imports and exports to major trading partners such as ASEAN, the European Union and the United States have increased. The total trade value between China and its largest trading partner ASEAN rose 27.6 percent to reach 1.72 trillion yuan, accounting for 14.8 percent of China's total foreign trade value.

Japan is China's fourth largest trading partner. The total value increased 16.2 percent to 770.64 billion yuan, accounting for 6.6 percent. In the same period, China’s total trade with countries along the Belt and Road reached 3.43 trillion yuan, an increase of 24.8 percent.

（With imput from Xinhua）