China's master plan to build Shenzhen, South China's Guangdong Province, into a model city for the country with global competitiveness, not only lifted market sentiment on Monday but also, more importantly, sent one of the clearest signals yet of how the country plans to move forward at a critical juncture marked by both enormous opportunities as well as profound challenges. 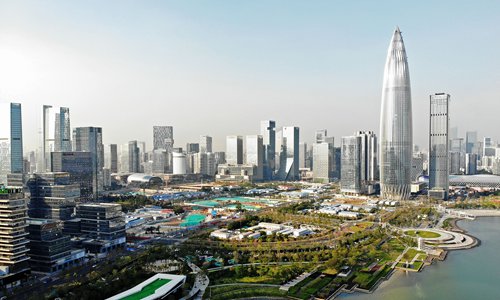 China on Sunday unveiled a document which sets to building Shenzhen into a pilot demonstration area of socialism with Chinese characteristics.

The plan underscored China's long-term commitment to reform and opening-up measures to realize its massive potential, and merely linking the plan to the trade war with the US and the situation in Hong Kong is missing the bigger picture and only exacerbates long-held misconceptions of China's development strategy, Chinese analysts noted.

Under the plan, Shenzhen will be granted special leeway to carry out reform and opening-up policies "from a higher starting point, higher levels and with higher goals."

Favorable policies will be offered in areas including technological innovation, financial and foreign trade.

The goal is to build Shenzhen into a model of high-quality growth for the country by 2035 and a "benchmark" city with "outstanding" competitiveness, innovation capability and influence by the middle of the century, according to the plan.

"This is a vision for Shenzhen, but what it really reveals is the consensus on how we move forward as a country," said Gao Lingyun, an expert at the Chinese Academy of Social Sciences in Beijing.

"We are sticking to our own pace of reform and opening up in spite of external changes."

The plan comes at a critical time when both the Chinese economy and the global economy face abundant uncertainties.

Domestically, the Chinese economy is undergoing a massive transformation where challenges linger.

Globally, the rise of populism and trade protectionism has cast a dark cloud over the world economy.

China's "positive approach" to addressing economic challenges also stood in stark contrast to that of the US and some other major economies which have resorted to protectionist moves to tackle problems, said Cheng Dawei, a professor of economics at the Renmin University of China in Beijing.

"It further demonstrates China's ability to read the trend and pursue proper measures as it has shown over the past four decades," she said.

Much consideration and efforts went into the development of the plan, according to Gao.

Officials and experts spent three years to assess the country's massive potential and challenges before coming up with the plan, he explained.

Shares of companies based in Shenzhen rallied on Monday, with 66 companies seeing an average gain of 5.6 percent.

The soaring share prices reflected high hopes for the plan that it could unleash a new round of high-quality growth for both Shenzhen and the country as reform and opening-up policies did over the past four decades, said Yang Delong, chief economist at Shenzhen-based First Seafront Fund Management Company.

"There are huge expectations," Yang said.

Given Shenzhen's proximity to Hong Kong, where violent protests have seriously damaged the city's global image, many have cast the plan as a way of replacing Hong Kong's role as a global financial center that the mainland's economy has been relying on for decades.

Such views are part of efforts by some foreign media outlets that seek to pit Hong Kong society against the mainland and are short-sighted, Chinese mainland analysts pointed out.

"This is not aimed at pushing Hong Kong aside by any means," Cheng said. "If anything, this will help Hong Kong because it will bring many opportunities to Hong Kong firms and residents."

Although the plan also offered favorable policies for Shenzhen's financial sector, including the yuan's internationalization and digital currency, it also called for financial cooperation with Hong Kong and Macao.

The plan is intended to be conducive to the Guangdong-Hong Kong-Macao Greater Bay Area development, which also aims to boost innovation and growth in the region.

Some argued Shenzhen cannot replace Hong Kong as a financial center at least in the short term.

In areas such as the yuan's offshore clearance, "Shenzhen will have a hard time catching up with Hong Kong," said an official in the cross-border financial sector who requested anonymity.

Given the timing, as the city's global image has been seriously dented by violent protests, the plan also serves as a reminder that Hong Kong must end the violence and get back on the right track to focus on its long-term prosperity, the Chinese analysts said.

"The door is open for Hong Kong, but it will be up to Hong Kong to seize the opportunity," Cheng said.