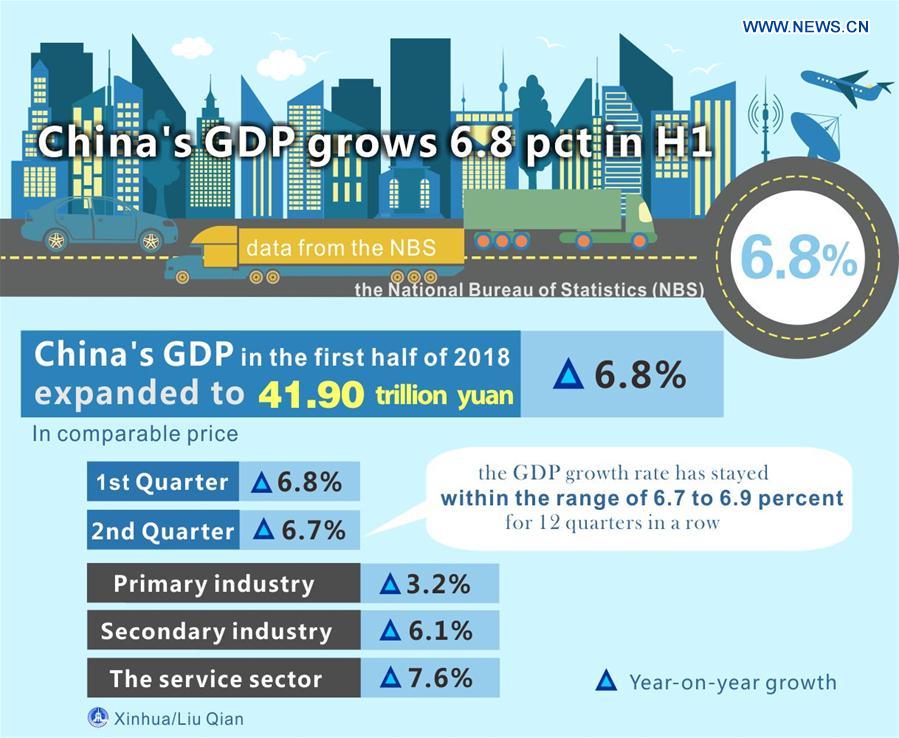 Graphics shows data released by the National Bureau of Statistics(NBS) on China's economic development in the first half of 2018. (Photo: Xinhua)

China's gross domestic product expanded 6.8 percent year on year in the first half of 2018 to about 41.90 trillion yuan (6.27 trillion U.S. dollars), data from the National Bureau of Statistics (NBS) showed Monday.

The pace was well above the government's annual growth target of around 6.5 percent.

In Q2, China's GDP rose by 6.7 percent year on year, slightly lower than the 6.8 percent from the previous quarter but representing the 12th straight quarter that GDP growth rate has stayed within the range of 6.7 to 6.9 percent, according to NBS data.

China's economy expanded 6.9 percent in 2017, picking up the pace for the first time in seven years.

NBS spokesman Mao Shengyong told a press conference that the Chinese economy has been running soundly in the first six months, offering "a good start" for the country's pursuit of high-quality

The service sector expanded 7.6 percent year on year in H1, outpacing a 3.2-percent increase in primary industry and 6.1 percent in secondary industry, according to NBS.

Consumption continued to play a more prominent role in driving growth, with final consumption contributing to 78.5 percent of the economic expansion in January-June, up from 77.8 percent in Q1 and 58.8 percent last year.

The domestic job market remained stable in June, with the surveyed unemployment rate in urban areas at 4.8 percent, unchanged from the level in May and down 0.1 percentage point from June last year.

However, noting increasing external uncertainties and the fact that China is still going through a critical stage in structural adjustment, Mao said the country would stick to the supply-side structural reform and coordinate efforts to ensure stable and sound economic performance.

Commenting on China-U.S. trade frictions, Mao said its impact, if any, would have been limited on the Chinese economy in H1, and requires further observation to judge the potential impact on the economy in H2.

With the global economy deeply integrated, the trade frictions, unilaterally stirred up by the United States, would "affect the global economic recovery and sustainability of global trade growth," he told reporters.

For the rest of the year, Mao said China's economy would stay sound and stable as domestic demand is now the deciding force behind economic growth. He expects consumption to continue its upward trend, and investment to remain stable.

He said while external demand remains an important factor in growth, despite China's challenges in foreign trade in H2, there are still favorable conditions to support stable and relatively fast trade growth.