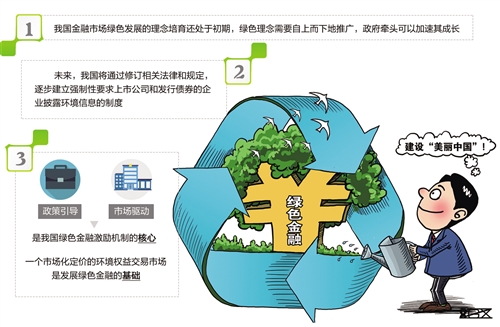 Calling China's green finance market "brand new," Matt Arnold, global head of sustainable finance at JPMorgan Chase, said the market grew the fastest and will continue to expand strongly as the government has made environmental protection a top priority.

"There is a lot of work to be done with the air, water, land, and food, so the green finance market will be here as long as that work is to be done," Arnold said in an interview with Xinhua.

"We have seen very encouraging activity in China, and the market is going to continue to grow," given the large gap between demand and current supply of green finance, he said.

China announced a plan in 2016 to establish a national green finance mechanism, becoming the first country worldwide to make such a move. It also helped push green finance to be included on the G20 agenda.

Data from the Climate Bonds Initiative and China Central Depository & Clearing Co. showed green bond issuance from China reached 37.1 billion U.S. dollars in 2017, up 4.5 percent from the previous record-breaking year. Of the total, 22.9 billion dollars are aligned with international definitions, accounting for 15 percent of the world's total and making China the second largest green bond market in the world.

Arnold believes China's green finance market is globally unique because of the comprehensiveness of collaboration. "What's interesting to me is how active the collaboration is between the Chinese government, banks and industries."

As part of its long-term global commitment to sustainability, the multinational financial giant will further tap into the market, helping its Chinese clients raise capital for their acquisitions in other countries, or the issuance of green bonds in international markets, according to Arnold.

The firm is expanding its comprehensive strategy to advance environmentally sustainable solutions for clients and its own operations, by setting two strategic goals that include sourcing renewable energy for 100 percent of its global power needs by 2020 and facilitating 200 billion dollars in clean financing through 2025.