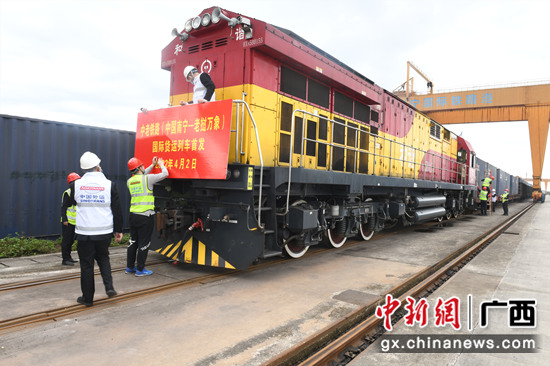 Loaded with 165 tonnes of industrial products produced by companies in Guangxi, the train will arrive in Vientiane in three days, according to the China Railway Nanning Group Co., Ltd.

Compared with sea shipping and other traditional methods, the freight train can cut the transportation time by more than 10 days, which helps save companies' costs, said Qian Feng, general manager of the Sinotrans Limited Guangxi branch, a participant in the cross-border transportation.

"The operation of the China-Laos Railway has created convenient and efficient traffic conditions for Guangxi's products to enter the Laos market, and a number of companies interested in developing business in Laos have consulted us," said Qian.

The China-Laos Railway, which kicked off operation on Dec. 3, 2021, stretches over 1,000 km, linking Kunming, the capital of southwest China's Yunnan Province, with the Laotian capital Vientiane.