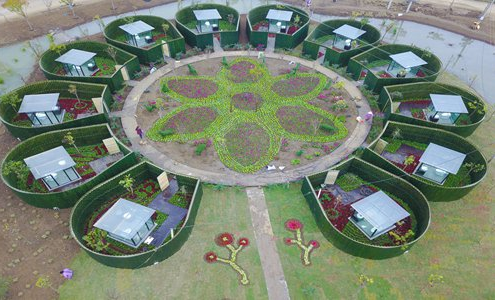 Facial recognition software that curbs toilet paper theft in Beijing, vacuum toilets in Hebei Province that flush without water, and even a 3D-printed public toilet block in Jiangsu Province; these are some of the smart and technology-driven measures that are being used in almost every aspect of China's campaign to improve its public washrooms. Launched in 2015, the "toilet revolution" has become an opportunity to shore up China's image and showcase the solutions being used to tackle basic sanitary problems to other developing nations, experts said. The fight against chronic sanitary problems has even created opportunities to add value to the "Made in China" label.Smart applicationThe 3D-printed public toilet block in Suzhou, Jiangsu Province, is just one example of the many smart and eco-friendly toilets around the country. The green and wood colored block, located at Sun Mountain National Forest Park, was made from construction waste materials using 3D printing technology, and doesn't use any steel, the Xinhua News Agency reported. The 3D toilets received 300,000 yuan ($45,337) in national tourism development funds because of its innovative technology, the Yangtze Evening Post reported. At some scenic sites, tourists are asked to scan QR codes with their phones to get an allotted 80 centimeters of toilet paper. They have to pay more if they wish to scan codes multiple times for more paper, the Xinhua report said. The technology can help save nearly 9,000 yuan in costs per toilet annually, Xinhua reported, quoting staff at the Humble Administrator's Garden tourist site. These machines will also be installed in more toilets around Suzhou. The 3D printed toilets and QR code machines used to dispense toilet paper came in response to a recent call issued by the China National Tourism Administration (CNTA) in November to improve toilets using technology. Authorities have been encouraging the application of Internet plus, a concept that calls for the use of the Internet in conventional industries, and similar innovative methods, such as WIFI-access toilets and smart toilets, in the management of restrooms. The use of recycled water technology, micro-water flushing, vacuum gas, and eco-friendly materials such as ecological wood and color concrete have been encouraged in newly built or upgraded toilets, according to CNTA. Many Chinese cities, including Nanjing and Ningbo, have included the concept of Internet plus in their regional plans to implement CNTA's request, Changjiang Daily reported. The call for the application of the Internet plus concept will prompt toilet construction, a relatively underdeveloped industry, to speed up its development phase in terms of efficiency and service, Li Yi, a research fellow at the Internet Research Center under the Shanghai Academy of Social Sciences, told the Global Times. Xinhua previously described toilets in some rural areas as "little more than makeshift shelters surrounded by bunches of cornstalks, and some were open pits next to pig sties".Internet plus is currently penetrating every field in China, which will force unbalanced and inadequate development to meet people's constantly growing needs for a better life, Li said. "The ongoing toilet revolution, against the backdrop of a broader campaign to upgrade 'Made in China' products, will hopefully bring changes that reach beyond the industry," Xinhua commented. When more Chinese companies make efforts to manufacture high-end toilets and hygiene products, the toilet revolution could bring reform to the industry, Li added. Global acclaimToilets are a window for tourism, which is part of the consumption focused service sector, and represent the quality of tourism and China's level of civilization, said Li Mingde, a former vice-president of the Beijing Tourism Society.Li said this is part of China's efforts to reduce its economy's reliance on manufacturing and construction.The toilet revolution saw over 20 billion yuan invested in installing or renovating 68,000 toilets at tourist sites, exceeding the target of 57,000 toilets, according to Xinhua. China has vowed to install or upgrade 64,000 toilets at tourist destinations from 2018 to 2020, according to an action plan released by CNTA.China's determination to clean up its toilets has earned international recognition. There have been more than 160,000 reports from US, UK and German media on China's toilet revolution, 93 percent of which are positive, the People's Daily reported in December. More recently, Indian newspaper The Hindu wrote in December 2 that "China is going hi-tech to resolve its chronic problem."Unsanitary toilets are a common problem faced by both China and India. But unlike India's 'Swachh Bharat' campaign, China's toilet revolution has seen quicker results due to higher-level governmental execution, Zheng Fengtian, a professor from School of Agricultural Economics and Rural Development at the Renmin University of China, told the Global Times. Religious beliefs and weaker execution capability have slowed down India's progress in solving its toilet issue, Zheng said.