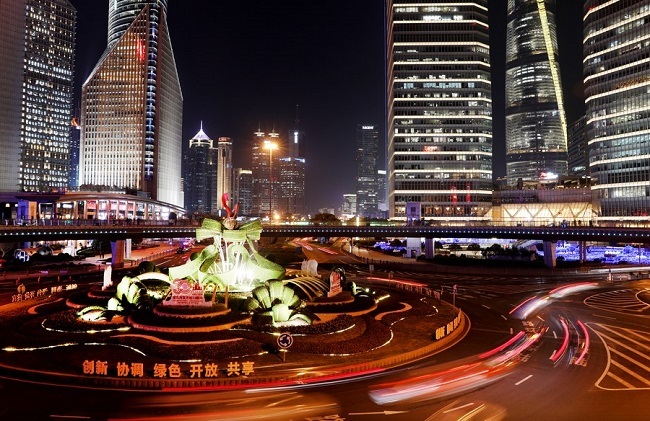 China will focus on promoting high-quality development in the 14th Five-Year Plan (2021-2025) period and beyond, which not only concerns the overall situation of the country's socialist modernization drive but also generates great impetus to pandemic-battered world economy.

At just-concluded "two sessions," lawmakers adopted the Outline of the 14th Five-Year Plan for National Economic and Social Development and the Long-Range Objectives Through the Year 2035, mapping out a blueprint for the next five to 15 years to guide the country's march toward modernization, with high-quality development remaining the theme.

From quantity to quality

Emerging from the epidemic-induced slump, China became the only major economy to attain positive growth in 2020, with its gross domestic product (GDP) increasing by 2.3 percent year on year to cross the 100-trillion-yuan threshold.

China set a modest economic growth target of over 6 percent year on year in 2021, with more efforts on reform, innovation, and high-quality development, according to the government work report.

Zhang Liqun, a research fellow with the Development Research Center of the State Council, noted that the primary goal of economic development is not to seek a nice-looking GDP figure but to raise the quality of the growth and ensure people's well-being.

Without setting an explicit economic growth target for the next five years, China will keep its economy running within an appropriate range and set annual economic targets in light of actual circumstances, according to the outline.

Analysts noted that by setting flexible growth targets, China will focus on high-quality growth and deep structural issues such as unleashing domestic demand and raising innovation capacity, instead of chasing after quantitative expansion.

Innovation is the primary driving force behind development.

The outline has charted the course for China's sci-tech development, showing China's confidence and resolve in breaking bottlenecks and enhancing independent innovation.

The country's R&D spending is expected to grow by over 7 percent annually in the next five years, according to the outline.

China is always committed to the people-centered philosophy of development and strives to further improve people's livelihoods through pursuing high-quality development.

China’s socialist modernization emphasizes people-oriented development, as evidenced by the country’s arduous efforts to eradicate poverty, its COVID-19 containment measures that always put people's health and safety first and the development blueprint and goals that aim to meet people's aspiration for a better life.

In 2020, all of China's nearly 100 million impoverished rural residents living below the current poverty line cast off poverty after eight years' efforts.

China's poverty alleviation campaign is "the work of a nation committed to its people," according to Stephen Perry, chairman of Britain's 48 Group Club.

As socialism with Chinese characteristics has entered a new era, the principal contradiction facing Chinese society has evolved into one between the unbalanced and inadequate development and the people’s ever-growing needs for a better life, according to Chinese President Xi's report at 19th CPC National Congress.

The evolution of the principal social contradiction requires the country to improve the quality and effectiveness of development, so that Chinese people will enjoy more substantial and lasting feelings of fulfillment and happiness as China strives toward goal of common prosperity in its modernization drive.

China will adopt a series of measures to improve people’s livelihood over the next five years, including increasing people's incomes, boosting employment, building a high-quality education system and improving the multi-level social security system, among wider measures, according to the Outline.

China is determined to promote green development as the government is walking a fine line between economic development and environmental protection.

Resolutely upholding the concept of "lucid waters and lush mountains are invaluable assets," China has been steadfast in resisting the old ways of economic expansion, which severely impacted the environment.

To pursue an eco-friendly growth pattern, China has taken stringent measures to promote the wider use of renewable energy, cut the production capacity of resource-intensive sectors and wage a battle against pollution.

According to China's 14th Five-Year Plan (2021-2025), the energy consumption per unit of gross domestic product (GDP) and carbon dioxide emissions per unit of GDP will be reduced by 13.5 percent and 18 percent, respectively, over the period.

To tackle climate change, China has vowed to peak carbon dioxide emissions by 2030 and achieve carbon neutrality by 2060.

Mher Sahakyan, director of the China-Eurasia Council for Political and Strategic Research in Armenia, noted that the Chinese government has stood firm on solving China's environmental problems by pursuing high-quality development based on local conditions.

"This year, China will continue to intensify efforts to improve the environment," Chinese Premier Li Keqiang said in the government work report.

China's high-quality development can only be achieved through greater openness, Chinese President Xi said at the opening of the Boao Forum for Asia Annual Conference in 2018.

In the 14th Five-Year Plan period and beyond, China will stay committed to opening up in a wider scope and broader areas and at a deeper level, and better participate in international economic cooperation.

According to the blueprint for its development in the next five to 15 years, China will accelerate forging a new development paradigm of "dual circulation," in which domestic and overseas markets reinforce each other with the domestic market as the mainstay.

By giving full play to the potential of the domestic market, both domestic and foreign markets can be better connected and utilized to realize robust and sustainable development.

China has a population of 1.4 billion and a middle-income group that exceeds 400 million. A growing Chinese market with rising domestic demand will bring great opportunities for foreign products, services and investment.

As China embarks on a new journey to build itself into a modern socialist country in all respects, adhering to high-quality development is a must and will not only benefit China but also bring more opportunities to the pandemic-rattled world.