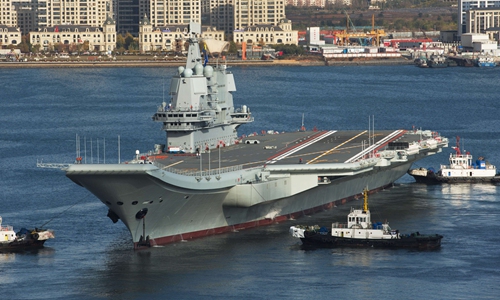 China's first domestically built aircraft carrier, the second in total, sailed through the Taiwan Straits and headed from north to south on Saturday, media reported on Sunday, with experts saying the warship is now technically mature and could be commissioned into military service soon, as a base in Sanya, South China's Hainan Province, could host large naval vessels.

Accompanied by an escort fleet, the aircraft carrier entered the Taiwan Straits from its north on Saturday evening, Taipei-based China Times reported on Sunday, citing information released by the defense authority in the island of Taiwan.

China's Ministry of National Defense or the Chinese People's Liberation Army (PLA) did not release any information on the warship's activity as of press time.

The domestically developed carrier is believed to be on its ninth sea trial since its departure from the Dalian Shipyard in Northeast China's Liaoning Province since Thursday, Hong Kong-based wenweipo.com reported on Thursday.

This indicates the warship is now technically mature, and this long voyage could be the end of sea trials that will see the carrier joining military service soon, they said.

Since the carrier's launch in April 2017, it has finished all related tests and can be commissioned at a proper time, naval expert Li Jie told the Global Times.

The Taiwan Straits could also serve as a good location to further test the warship, as it is far away from its shipyard, Li said, noting that media in the island of Taiwan and foreign press should not read too much into this normal activity.

An anonymous military expert said on Sunday that the appearance of the "stunning" domestically developed aircraft carrier in the Taiwan Straits came at a time when military enthusiasts are highly anticipating its going into military service.

Usually, a commissioning ceremony will be held at a military base, and from the route the aircraft carrier is taking, it is likely passing the Taiwan Straits to finally arrive at its possible mother base in South China's Hainan Province, where it will officially be commissioned, the expert said.

In November 2013, aircraft carrier Liaoning for the first time moored at a naval port in Sanya, Hainan, the Xinhua News Agency reported then.

The naval port in Sanya is a large port that has related facilities to meet the needs for hosting all kinds of large naval vessels, according to Xinhua.

This means China already has a second naval base capable of hosting an aircraft carrier in addition to the one in Qingdao, East China's Shandong Province, which serves as the mother base for the Liaoning, analysts said.

The Chinese Navy will soon enter an era with two aircraft carriers in service and no one can shake China's position as a regional major naval power in the Asia-Pacific region, the anonymous expert said.

While China is striving to make the South China Sea a sea of peace, some countries from outside the region have been stirring trouble and causing instability, the expert said, noting that the commissioning of the new aircraft carrier will safeguard China's sovereignty and territorial integrity, protecting peace in the South China Sea and helping China fulfill its responsibility as a major country in regional and world peace.