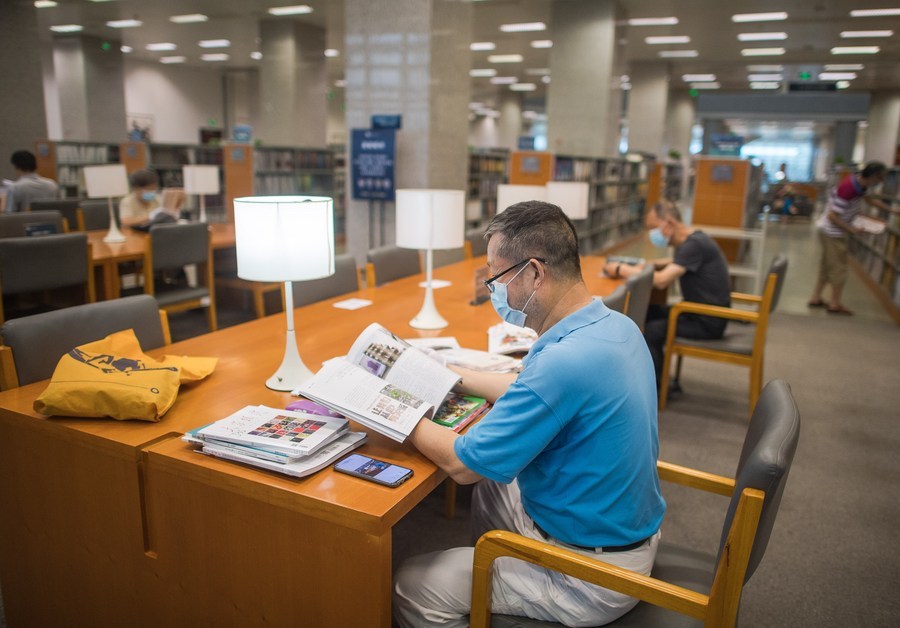 WUHAN, June 14 (Xinhua) -- China's Hubei Province, once hit hard by COVID-19, on Sunday reopened five major public cultural venues in the latest move to return to normalcy after the epidemic tapered off.

It followed the decision of Hubei to lower its COVID-19 emergency response from level II to level III starting Saturday, which allows its public venues, conferences, exhibitions, trans-provincial tourism and classes to gradually reopen or resume operation.

All the five facilities require reservations in advance and have placed caps on the daily number of visitors.

The Hubei Provincial Museum said it had only opened four exhibition halls and would receive no more than 1,000 visitors a day. The Hubei Museum of Art has capped daily visitors at 300.

The provincial library said it would strictly disinfect its books before they are lent and after their return. It also waived charges for those who fail to return books in time due to the epidemic.

"Finally I can return the three books I borrowed last October," said 70-year-old Li Aizhen, who was among the readers waiting in a line to return books.

At the Hubei Provincial Museum, many visitors went directly to fetch audio guides in place of docent tours. Staff held placards asking visitors to "keep a distance of at least one meter."

Fang Qin, curator of the museum, said the COVID-19 epidemic has sounded the alarm bell for the future management of museums, as their enclosed spaces and large visitor numbers make them vulnerable during an epidemic.

"In the past, we were mainly concerned about preventing fires and theft in the design and operation of museums. Now we must add public health crises onto the list," Fang said.