WUHAN, Oct. 7 (Xinhua) -- Thirty key tourist attractions in central China's Hubei Province, once hard hit by COVID-19, have received over 1.77 million tourists as of Tuesday during the National Day holiday, according to local tourism authorities. 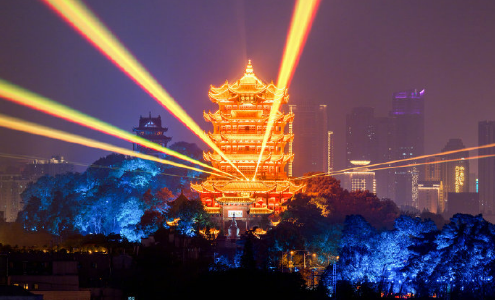 The data from the provincial department of culture and tourism showed the comprehensive income of the tourist attractions exceeded 174.5 million yuan (about 25.7 million U.S. dollars) as of Tuesday during the holiday.

Some hot tourist attractions in the province such as the Yellow Crane Tower, a landmark in the provincial capital of Wuhan, reached the maximum carrying capacity limit for the number of tourists, the department said.

Since a tourism promotion event for the province was launched, over 380 tourist attractions in Hubei have received over 24.2 million tourists from Aug. 8 to Sept. 30, with the comprehensive income exceeding 2.09 billion yuan.

The province has organized 1,348 volunteers to provide tourism consultation and other services for the tourists.

China celebrates its National Day on Oct. 1, which coincided with the traditional Mid-Autumn Festival this year, thus extending the weeklong National Day holiday to eight days until Oct. 8. Enditem