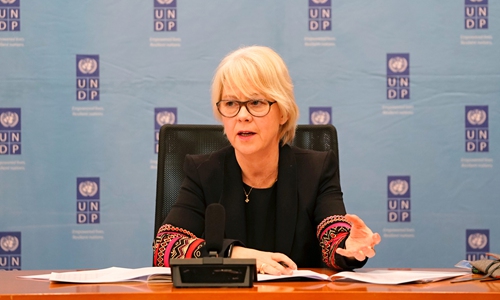 UNDP released the 2019 Global Human Development Report called "Beyond income, beyond averages, beyond today," on Monday in Beijing, which focused on inequalities in human development in the 21st century.

"China's development progress over the last three decades has been remarkable," said Beate Trankmann, UNDP resident president in China at the event.

China has played an essential role in the global progress of poverty alleviation by lifting around 750 million people out of extreme rural poverty, Beate noted at the event. "Without China's progress, the world's progress on that indicator will look quite different."

"That's quite an achievement and the heavy investment shows how much focus China puts on education," Beate noted.

Wang Dong, policy adviser and program director for Sustainable Development Goals Localization of UNDP China, said China's development concept has changed from emphasizing one dimension to focusing on an integrated, coordinated concept of economic, social and environmental development over the past decades, which provides an institutional support for all aspects of the country's development.