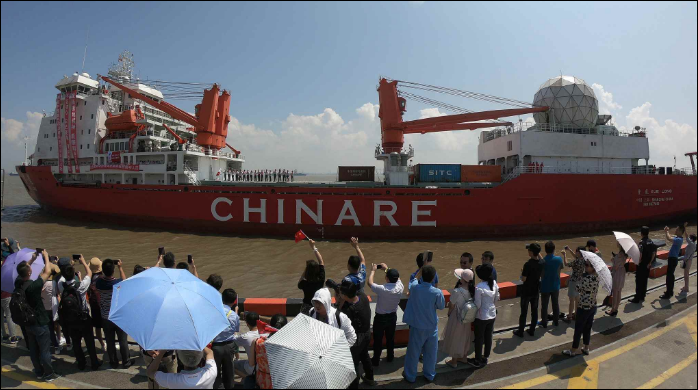 China's ninth Arctic expedition was launched as the ice breaker, Xuelong, departed the Port of Shanghai on Friday, setting sail for the North Pole region with over 12,300 sea miles' journey lying ahead.

This non-stop voyage, expected to take about two months, is the first of its kind since the country published a white paper of it's Arctic policy this January.

China's exploration of the arctic region can be dated back to the late 1990s. The first seven focused on scientific research and the eighth one, which happened the same time last year, traveled the Northwest Passage along the Arctic rim for the first time.

The ninth expedition is aimed to enrich China’s knowledge on marine hydrography, meteorology and chemistry through investigation of the high latitude sea area in the Arctic Ocean. Hopefully, this will provide some fundamental information on comprehensive assessment of that area's environment and climate.

Onboard Xuelong are crew members and international scientists from China, France and the US, who are going to share research data on recently heated topics like ocean pollution. They are also joined by reporters, including Li Juan with CCTV.