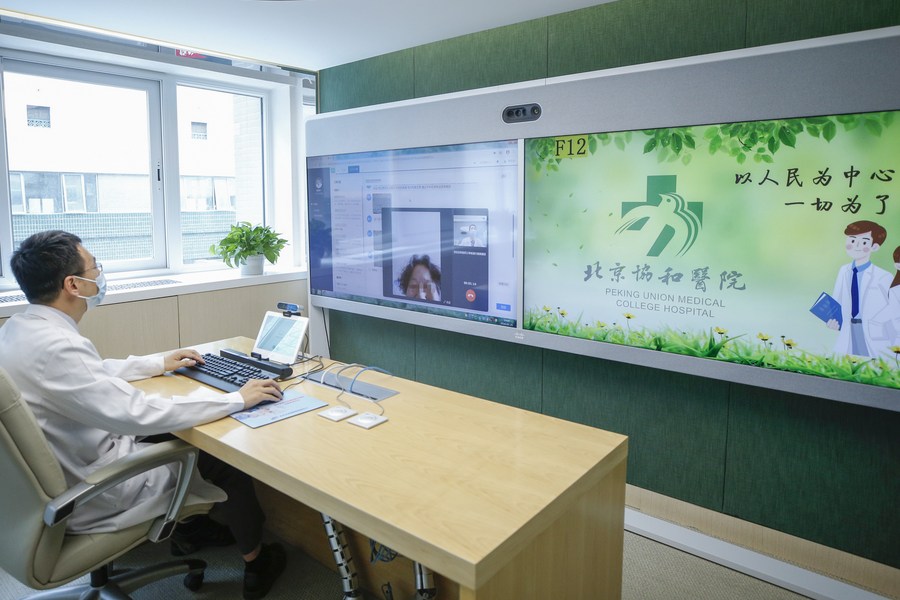 An endocrinologist provides diagnosis and treatment services for a patient via video link in Peking Union Medical College Hospital in Beijing, China, May 25, 2020. (Photo: Xinhua)

A remarkable rise has been seen in the use of such services since China's State Council or the Cabinet released a guideline on promoting "internet plus health services" in 2018.

Number of internet hospitals in China soared from just over 100 in December 2018 to more than 1,600 in June this year, official figures showed, indicating online health services were already a key part of the country's health service system.

The number of people who availed of internet-based health services from the 44 hospitals directly under the management of China's National Health Commission (NHC) in 2020 was 18 times that in 2019, said Ye Quanfu, head of the commission's National Institute of Hospital Administration.

The internet hospital of Peking Union Medical College Hospital (PUMCH), one of China's most reputed, is the first of its kind in Beijing to be accredited by authorities.

People can now seek online health services from more than 1,200 doctors in 38 departments of the PUMCH. Around 70,000 patients have availed of the services this way.

An immediate benefit of internet technologies, including through web hospitals, is that information helps cut the legwork that patients used to do.

In a way, the pandemic fueled innovation in the rapidly-expanding internet-empowered medical service sector over the last two years.

In early 2020, a resident surnamed Gu in Taizhou, east China's Zhejiang Province, developed a fever after he traveled back from Wuhan, which was hit hard by the virus at the time. He was afraid of going to hospital.

After learning about the case, Taizhou Enze Medical Center took Gu to the medical consortium for nucleic acid testing in an ambulance and immediately hospitalized him after the infection was confirmed.

"He had a rapid recovery and caused no widespread transmission as we knew about his condition early and responded swiftly," said Liang Junbo, deputy chief of the center.

Like in Gu's case, the internet-empowered medical services helped meet patients' demand, reduced the burden on hospitals and lowered the chances of cross infections by preventing people from gathering in hospitals during the pandemic.

"Presurgical evaluation, instruction on postoperative care and explanation of pathological test results can be made possible via online services," said Chang Qing, deputy chief of medical affairs management in the PUMCH.

Chang suggested that medical teams can be moved online in the future to better serve patients with comorbidities and that a disease monitoring system can be established through the use of internet hospitals to warn early about complex and critical medical conditions.

Experts noted that despite rapid development, internet-empowered medical services in China were still in a primary stage of development.

The government departments will explore innovative approaches to regulating the emerging business and creating an enabling environment for its stable and sustainable development, said Liu Wenxian, an official with the NHC.