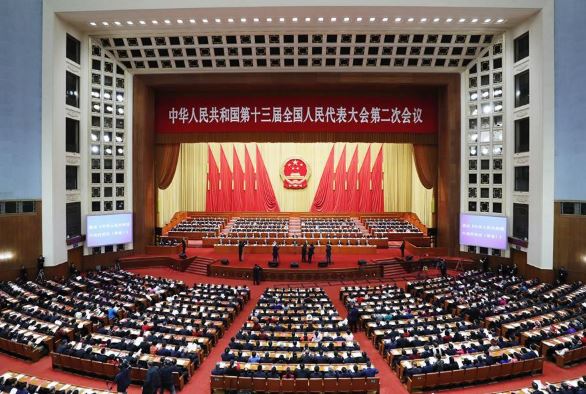 The second session of the 13th National People's Congress (NPC) holds its closing meeting at the Great Hall of the People in Beijing, capital of China, March 15, 2019. (Photo: Xinhua)

BEIJING, March 15 (Xinhua) -- As the "two sessions," a key event in China's political calendar, came to an end Friday, the country has created decisive underpinning for navigating through complexities toward its goal to build a moderately prosperous society (Xiaokang) in all respects.

The second sessions of the 13th National People's Congress (NPC) and the 13th National Committee of the Chinese People's Political Consultative Conference (CPPCC) were convened in a crucial year for China as it has set 2020 as the target year to achieve Xiaokang, with extreme poverty eradicated.

At the closing meeting of the NPC session on Friday, nearly 3,000 legislators approved a resolution on the government work report, which set new targets for sustained economic and social development in 2019.

They adopted China's first unified foreign investment law as well as an array of other resolutions to deepen reform and opening up.

As a highlight of the two sessions, the new foreign investment law sends a positive signal of China's resolve to pursue high-level opening up by creating a level playing field where all investors home and abroad can participate and compete.

It is "a fundamental law in lifting China toward a new stage of high-level opening up in the new era," said top legislator Li Zhanshu Friday.

It stipulates that the state shall manage foreign investment according to the system of pre-establishment national treatment plus a negative list.

With unified provisions for the entry, promotion, protection, and management of foreign investment, it serves as a fundamental law for foreign investment in China, expected to create a more stable, transparent and predictable investment environment.

Over the past decades, China has made substantial achievements in attracting foreign capital. By the end of 2018, about 960,000 foreign-invested enterprises had been set up in the country, with the accumulated foreign direct investment exceeding $2.1 trillion.

Zhang Yuejiao, a professor at Tsinghua University and former chair of WTO Appellate Body, said this legislation is especially significant against the backdrop that some countries seem to be closing themselves to the world.

"Amid setbacks in economic globalization and challenges to multilateralism, China is embracing the international trade liberalization and investment facilitation more resolutely and openly," she said.

It set its GDP growth target at a range of 6-6.5 percent, consumer inflation target at around 3 percent, the surveyed urban unemployment rate at around 5 percent, and the registered urban jobless rate within 4.5 percent.

It aims to create over 11 million new urban jobs, reduce its rural poor population by over 10 million, and cut its sulfur dioxide and nitrogen oxide emissions by 3 percent.

These targets "represent the country's aim of promoting high-quality development, are in keeping with the current realities of China's development, and are aligned with the goal of completing the building of a moderately prosperous society in all respects," according to the government work report.

There are less than two years left for China to meet its goal of eradicating extreme poverty by 2020, a key indicator of Xiaokang.

"There should be no retreat until a complete victory is won," said President Xi Jinping at a panel discussion during the two sessions, urging perseverance in the fight against poverty.

In a legislation plan unveiled during the sessions, the top legislature promised to support China's high-quality development with high-quality legislation by moving forward with formulating and revising urgently needed laws for deepening market-based reforms and expanding high-standard opening up.

The plan includes deliberation on the Civil Code, formulation of laws on the promotion of basic medical and health care, real estate tax, and export control, as well as revision of the Securities Law in 2019.

"Although China's GDP growth rate has declined, the quality of growth has significantly improved," said Lin Yifu, head of the Institute of New Structural Economics at Peking University.