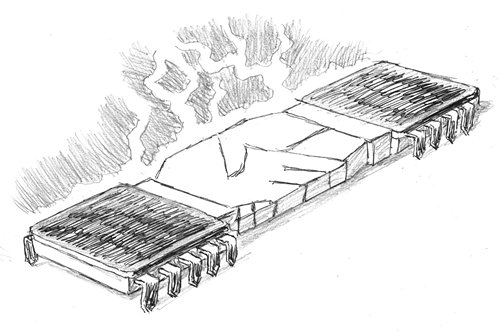 South Korea's direct investment in China has declined in recent years, but this trend may be about to change. China's rapid development in science and technology, and in high-tech and high value-added industries such as the semiconductor sector, has led to an increase in competition between the two countries. But China's open and inclusive development methods and the potential of its emerging industries have also offered new opportunities for further cooperation.At present, China is still strongly dependent on South Korea for semiconductors. South Korea's decision to deploy the THAADmissile system has had a negative influence on mutual trade for much of this year. But South Korea's exports of goods such as semiconductors to China have retained considerable scale. According to China's customs data, in the first three quarters of this year, China's exports to South Korea amounted to 514.01 billion yuan ($77.62 billion), an increase of 17.1 percent year-on-year, and imports reached 868.42 billion yuan, up by 15.8 percent. China's trade deficit with South Korea also rose, increasing by 14 percent to 354.41 billion yuan. South Korea has had one of the world's top semiconductor sectors for decades, with Samsung having developed 64K DRAM in 1983. The country's progress has barely slowed down since then. In 2015, two of the top five semiconductor companies in the world were from South Korea, the second ranked being Samsung and the fourth being SK Hynix. In the second quarter of this year, Samsung's semiconductor business even surpassed US chip giant Intel for the first time and became the new global chip leader.The semiconductor sector contributes around 5 percent to South Korea's national GDP. Samsung Electronics and SK Hynix lead the way, but there are more than 20,000 companies of various sizes in the industry. South Korea also has a complete industrial chain, from design, manufacturing, packaging and testing to equipment and materials. So the country is a strong competitor. But as a rising star, China is still expected to be able to stop relying on South Korea's semiconductors at some point, and even to catch up in some areas. In recent years, the Chinese government has actively promoted the semiconductor market with the goal of drastically reducing its dependence on imported semiconductors. To this end, the "Made in China 2025" plan envisions that China's self-sufficiency in chips will reach 50 percent in 2025.A number of domestic semiconductor companies are now steadily developing. State-owned chip maker Tsinghua Unigroup announced in January plans to invest a total of $70 billion to build three new semiconductor factories in Wuhan, Chengdu and Nanjing.  In terms of OLED technology, Chinese tech giant BOE Technology Group Co is making concerted efforts. Recently, BOE held a ceremony to recognize the opening of its sixth generation flexible AMOLED production line in Chengdu. This marks the first flexible screen production line to be put into mass production in China. Previously, Samsung was the world's only maker of flexible screens.China's development in the semiconductor industry is attracting South Korea to open a new mode of cooperation. In terms of the industrial competitiveness of the two countries, South Korea's strengths lie in its technology, quality, industrial ecosystems, infrastructure, innovation networks and diverse services. China's advantages are in its cutting-edge technologies, large market, industrial policy and its booming e-commerce sector. In the future, the two parties can seek cooperation in such areas as R&D, design and services to continuously explore new markets and lead the international trend to higher levels. For example, through in-depth integration of the two sides, they could realize the combination of driverless technologies with automobiles, ships and aircraft, as well as developing big data analysis.A friendly policy environment can also provide good opportunities for cooperation and development between the two countries. Many of the two countries' current development strategies can be linked to each other. For instance, Made in China 2025 and South Korea's Manufacturing Industry Innovation 3.0 strategy could have potential synergy. These policies in China and South Korea can offer greater convenience and space for cooperation in high-tech industries.