China is vigorously building offshore wind farms on its economically developed east coast as the nation lays detailed plans to reduce carbon emission in the decades to come. 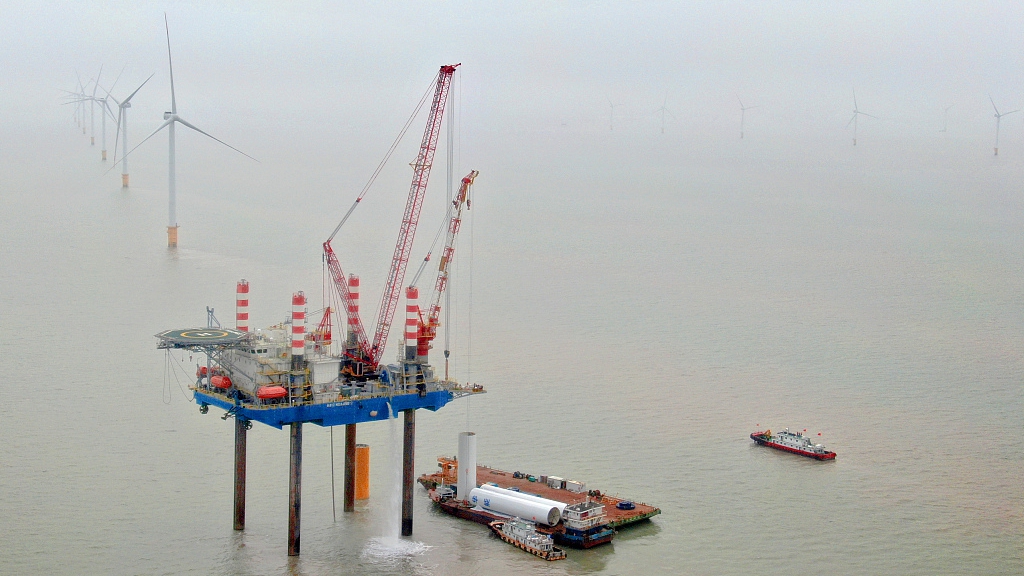 Almost 40 kilometers into the Yellow Sea, 150 gigantic wind turbines are spinning for power that could cover the full-year electricity demand for 1 million households.

The 12-billion-yuan Rudong offshore wind farm, the largest wind farm in the country by capacity, uses predominately homemade technologies as China cements itself as an R&D powerhouse in renewable technologies.

Wind power is a major source of renewable energy for China, which has been building turbines in the gusty northwest regions and the sea to the country's east. China is aiming to increase the share of wind and solar energies from 11 percent this year to 16.5 percent in 2025, giving green power a bigger role while curbing the use of coal power, according to a proposed plan from the National Energy Administration.

Rudong wind farm would help to reduce 1.46 million tons of carbon dioxide emissions each year because it can produce electricity that needs 550,000 tons of coal as fuel, according to the Rudong Daily newspaper. The wind power facility will help to ease electricity shortage in east China's Jiangsu Province, an economic engine and a manufacturing hub.

A ship that's able to convert to a construction platform above sea level is shouldering most of the construction works. The Chinese vessel is equipped with a crane that's able to lift weight that equals four A380 jumbo jets combined, according to CMG. One of its heavy-lifting duties is to elevate turbine blades that stretch more than 83 meters in length. The blade is made of carbon fiber, which helps to reduce the weight by about 2 tonnes compared to traditional blades made of glass fiber. A 15-story offshore converter station, developed by China Three Gorges Corporation, was also shipped to the wind farm earlier this year. The converter station is said to be the world's biggest, and first of its kind in Asia, CGTN reported in July.

Last year, China announced that it will strive to peak carbon emissions before 2030 and achieve carbon neutrality before 2060.

By 2030, the share of non-fossil energy consumption will be around 25 percent and carbon dioxide emissions per unit of GDP will drop by more than 65 percent compared with the level registered in 2005, according to the plan.