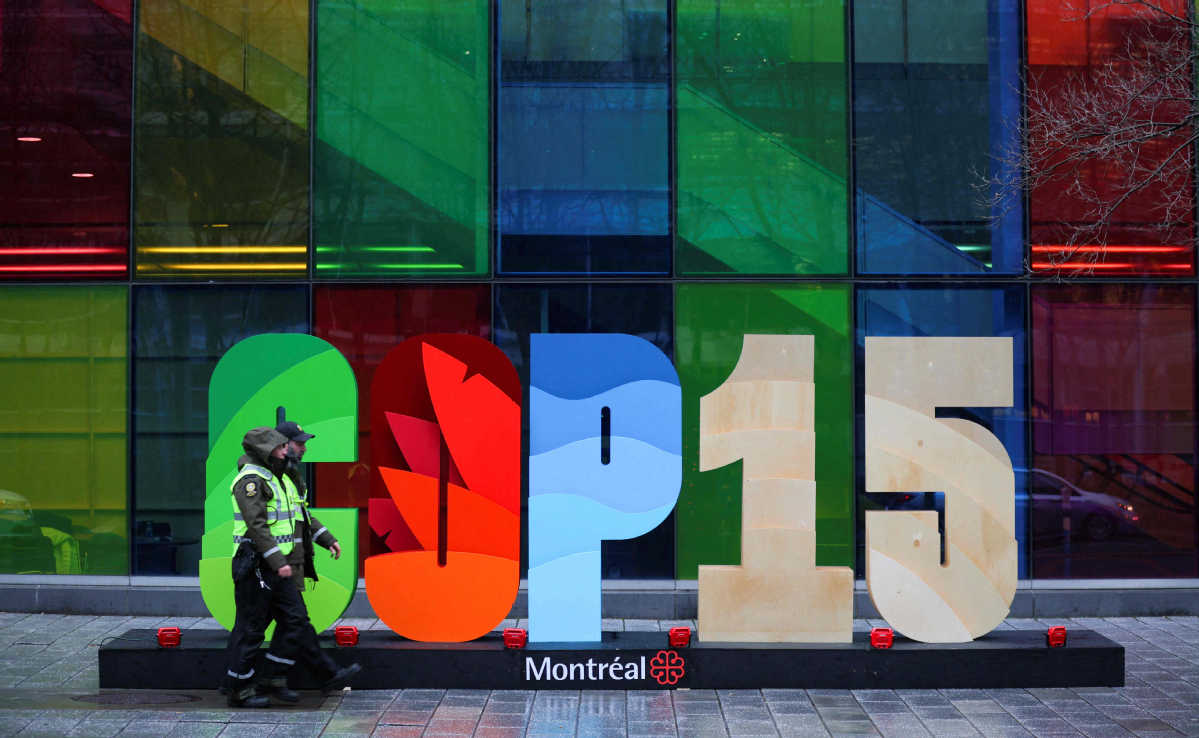 Police officers walk past a sign as they patrol outside the Palais de Congres, during the opening of COP15, the two-week UN biodiversity summit in Montreal, Quebec, Canada Dec 6, 2022. [Photo/IC]

China's leadership role at COP15 is winning praise from conference attendees as the United Nations biodiversity conference moved into high-level talks on Thursday.

Elizabeth Maruma Mrema, executive secretary of the UN Convention on Biological Diversity, said President Xi Jinping's speech via video link at the opening ceremony of the event's high-level segment created an "enabling environment" that helps to move the negotiations forward.

"We appreciate the president's message because that also has created an enabling environment here to continue both technically and politically these negotiations, and to ensure that China, as the leader, and as the president of this conference to the parties, emerges victoriously. It will not only be a victory for China alone, but the whole world led by China," she added.

She said Xi's messages underscored crucial points, including one on multilateralism. Environmental ministers from around the world are gathering at COP15 to decide on an ambitious framework to reverse biodiversity losses so it is important that they collaborate at this international meeting, Mrema added.

Xi also emphasized the importance of a sound ecosystem and he connected that with ecological civilization, which is basically harmony between people and the planet, Mrema said.

China's presidency of COP15 has been very constructive and it helps to bring about friendliness in the negotiations, she said. As COP15 president, China's Minister of Ecology and Environment Huang Runqiu has taken actions to understand the positions of the different delegations and to bridge the gaps between the parties, she said.

Andreas Lekunze Nembo, a senator from the Republic of Cameroon, said he is representing COMIFAC, a parliamentary network for the protection of the forest ecosystems of Central Africa.

Nembo expressed his appreciation to China for enhancing the cause of biological diversity put forth 30 years ago in Rio, he said.

Romy Andrianarisoa, president of the Commission for Sustainable Development and Business Ethics of the Groupement des Entreprises de Madagascar, said that she was happy to hear that the countries are in alignment on the urgency to act now to protect biodiversity.

It is great that a country as big as China is taking on the leadership role of this conference, because it means that actions taken by China will accelerate global momentum to protect biodiversity, she added.

"We trust in the leadership of China in this COP15, and we've seen different commitments taken. I went to visit the different actions at the China booth. I believe there's a strong will to change things," she said.

Ren Hai, a professor and director of the South China Botanical Garden at the Chinese Academy of Sciences, said the speech delivered by Xi injected strong political will into a critical period of the negotiations for the Post-2020 Global Biodiversity Framework.

COP15 negotiations have reached the halfway mark but the parties have yet to arrive at a consensus on over half of the targets, he said.

"Under these circumstances, in order to achieve both ambitious and pragmatic goals, President Xi Jinping proposed to maintain a fair and reasonable global order for biodiversity conservation, support developing countries in enhancing their capabilities, turn ambitions into actions, and combine biodiversity conservation with coordinated response to climate change and the promotion of green development," he said.

These political principles are timely and could point the way for the high-level talks, he said.