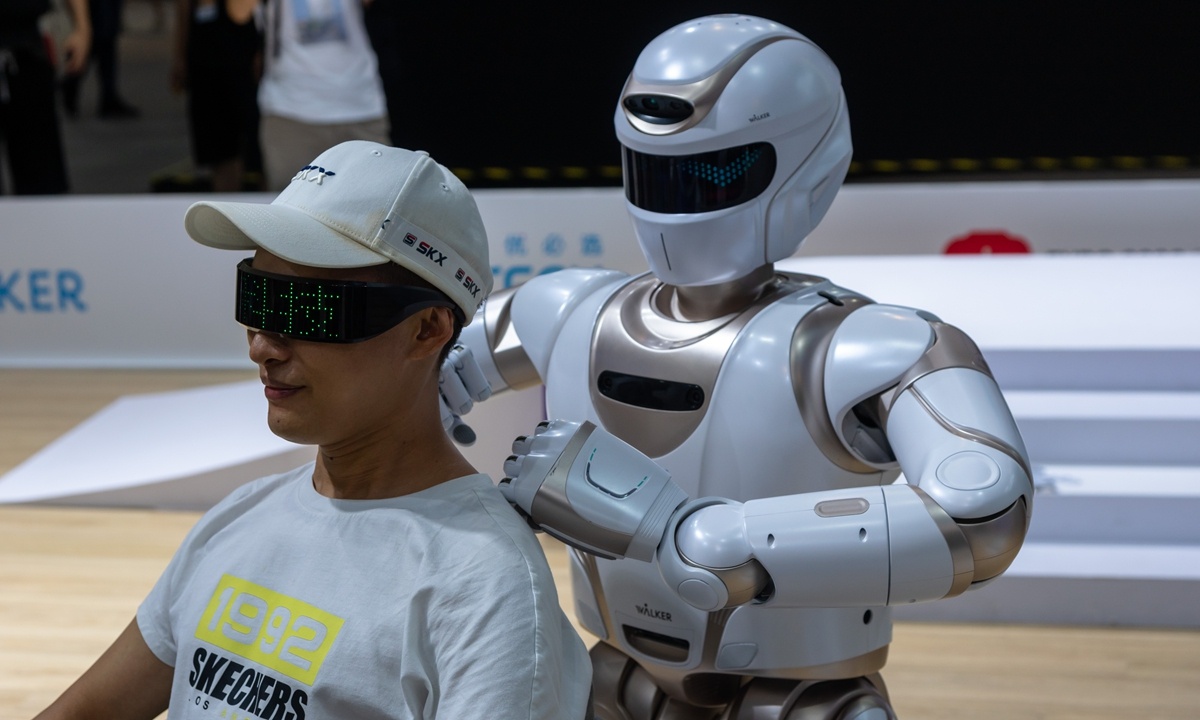 A robot performs a massage for a visitor at the 2021 World Artificial Intelligence Conference. (Photo: VCG)

Top officials from China's Ministry of Industry and Information Technology (MIIT) said the country will promote new emerging industry clusters, including the layout of industry chains in cutting-edge sectors such as artificial intelligence (AI) and quantum communication, to ensure the resilience of the industry and supply chains of the world's second-largest economy.

Tian Yulong, chief engineer with the MIIT, said that the country will speed up efforts to create industry chains in forward-looking sectors such as AI and quantum communication.

Such an approach will be coupled with an upgrading in more traditional sectors including engineering equipment, nonferrous metals, construction materials and petrochemicals to consolidate China's lead among the world's industrial powers, along with efforts to scale up China's advantage in emerging sectors including bullet trains, electric equipment, new energy and telecommunications, Tian told a State Council Information Office press conference on Monday.

China enjoys leading status in AI and quantum communication technologies, Chinese analysts and industry insiders said, but there is urgency to beef up technology self-reliance to boost supply chain security, given the looming risk of a technology sector decoupling from the US.

China is actually at the forefront of the world in AI, running almost neck-and-neck with the US, Liu Gang, director of the Nankai Institute of Economics and chief economist at the Chinese Institute of New Generation Artificial Intelligence Development Strategies, told the Global Times on Monday.

Liu said that the number of AI enterprises in China is second only to the US, and the numbers of patents and published papers have already surpassed those of the US. The nation is also leading in core algorithms and algorithm-based application software technology internationally - as demonstrated by Douyin's (TikTok's Chinese version) dominance in the global market.

Moreover, China enjoys certain advantages in intelligent connected vehicles, intelligent manufacturing, and the intelligent medical treatment sector - also major areas of competition with the US - by having already established a solid base for application scenarios and talent recruitment.

In quantum communication, Chinese scientists have set up an integrated network, and they realized quantum key distribution between users over a combined distance of 4,600 kilometers in 2021. The Xinhua News Agency reported then that an entire industry chain and eventually a truly secure quantum internet will be possible, citing Pan Jianwei from the University of Science and Technology of China.

Despite having a certain lead, Chinese experts warned that more efforts in self-reliance are needed amid a rising trend of China-US technology decoupling.

In addition to its relentless crackdown on Chinese telecommunication giant Huawei, the US in April added seven Chinese supercomputing firms to its entity list, denying these entities US technology.

A Bloomberg report in April said that technological fragmentation could lead to losses of about 5 percent of global GDP, citing IMF research.

In order to strengthen the security of the industry chain of vital sectors, Liu emphasized that the key is still to tackle bottlenecks and increase investment and resources in chip manufacturing.

The MIIT has designated eight pilot zones across China, including Beijing and Shanghai. Each of these zones aims at breakthroughs in AI sub-sectors such as algorithms, trade infrastructure, basic software and medical services.

Tan Wenhua, a veteran venture capitalist in Beijing's Zhongguancun, said the competition in cutting-edge sectors comes down to competition of talent. Tan said that the government should expand application scenarios for new, cutting-edge technologies. Local governments have a tendency to trail new technology trends, instead of guiding their development, Tan said.

Liu pointed to the need for further improving and developing basic software such as operating systems and hardware - especially manufacturing chips, which is a bottleneck problem of the industry.

It could take China five to 10 years to catch up with the US in AI, said Liu, adding that the process might be faster if China makes breakthroughs in key fields as the country has accelerated research and development (R&D) in areas like chip manufacturing.

Guo Guoping, a key member of the R&D team and professor at the Hefei-based University of Science and Technology of China, told the Global Times on Monday that in addition to quantum communication, quantum computing is a sector where global competition has been fierce.