BEIJING, Feb. 24 (Xinhua) -- The Standing Committee of the National People's Congress, or China's top legislature, during a session Monday adopted a decision on thoroughly banning the illegal trading of wildlife and eliminating the consumption of wild animals to safeguard people's lives and health. 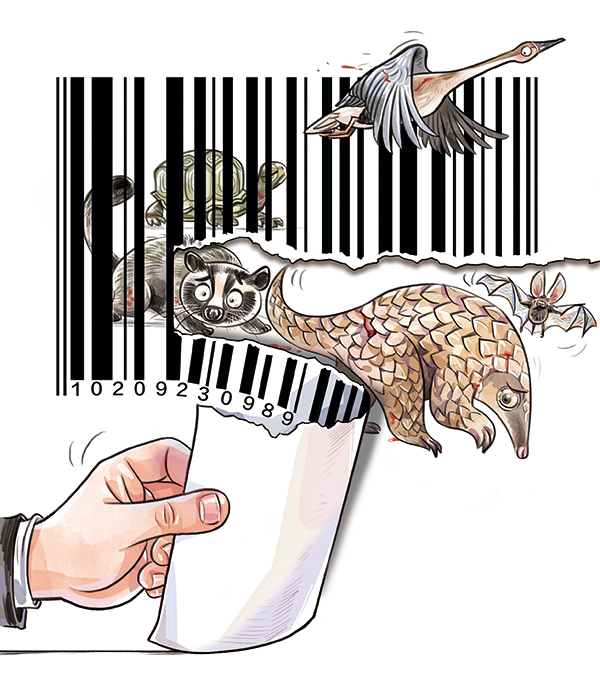 The move aims to safeguard biological and ecological security and effectively prevent major public health risks, among other purposes.
The consumption of terrestrial wild animals "of important ecological, scientific and social value" that are under state protection, as well as other terrestrial wild animals, including those that are bred or reared in captivity, shall be thoroughly prohibited, according to the decision.
The hunting, trading and transportation of terrestrial wild animals that naturally grow and breed in the wild for the purpose of consumption shall also be completely prohibited.
The decision stipulates that illegal consumption and trade of wildlife shall be severely punished.
Those who, in violation of the law on the protection of wildlife and other relevant laws and regulations, hunt, trade, transport or eat wild animals shall be given heavier penalties on the basis of existing laws and regulations, according to the decision.
Acts of consuming wild animals illegally and of hunting, trading or transporting wild animals for the purpose of consumption, which are newly covered by the decision, shall entail punishment applicable to similar acts covered by China's existing laws, including the law on the protection of wildlife.
The decision also stipulates that the use of wild animals for non-edible purposes, including scientific research, medical use and display, shall be subject to strict examination, approval and quarantine inspection procedures in accordance with relevant regulations.
The decision demands governments of various levels strengthen supervision and inspection, and strictly investigate and punish violations of this decision and relevant laws and regulations.
Illegal business sites and illegal business operators shall be banned or shut down in accordance with laws, according to the decision.
The decision takes effect on the day of its promulgation.