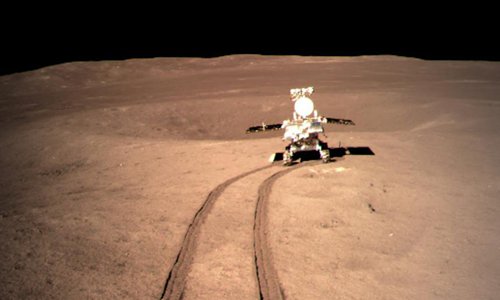 Photo provided by the China National Space Administration on Jan. 4, 2019 shows image of Yutu-2, China's lunar rover, at preset location A on the surface of the far side of the moon. Lunar rover Yutu-2 has been driving on the far side of the moon after separating from the lander and scientific devices on both the lander and rover are currently gathering data, the China National Space Administration (CNSA) said late Friday. (Xinhua)

China's Yutu-2 became the longest-working lunar rover on the Moon when it started to work for the 13th lunar day on the far side of the Moon.

The previously record was held by Lunokhod 1, the robotic rover of the former Soviet Union that became the world's first to be sent to the Moon in 1970, where it worked for about 10 months.

China's Chang'e-4 probe, including a lander and Yutu-2 launched on December 8, 2018, made the first-ever soft landing on the Von Karman Crater in the South Pole-Aitken Basin on the far side of the Moon on January 3, 2019.

Both the lander and rover have resumed work for the 13th lunar day after laying dormant during the extremely cold night, according to the Lunar Exploration and Space Program Center of the China National Space Administration.

The rover has driven more than 345 meters on the far side of the Moon to conduct a scientific exploration of the virgin territory.

A lunar day equals 14 days on Earth, a lunar night is of the same length. The Chang'e-4 probe switches to dormant mode during the lunar night due to a lack of solar power.