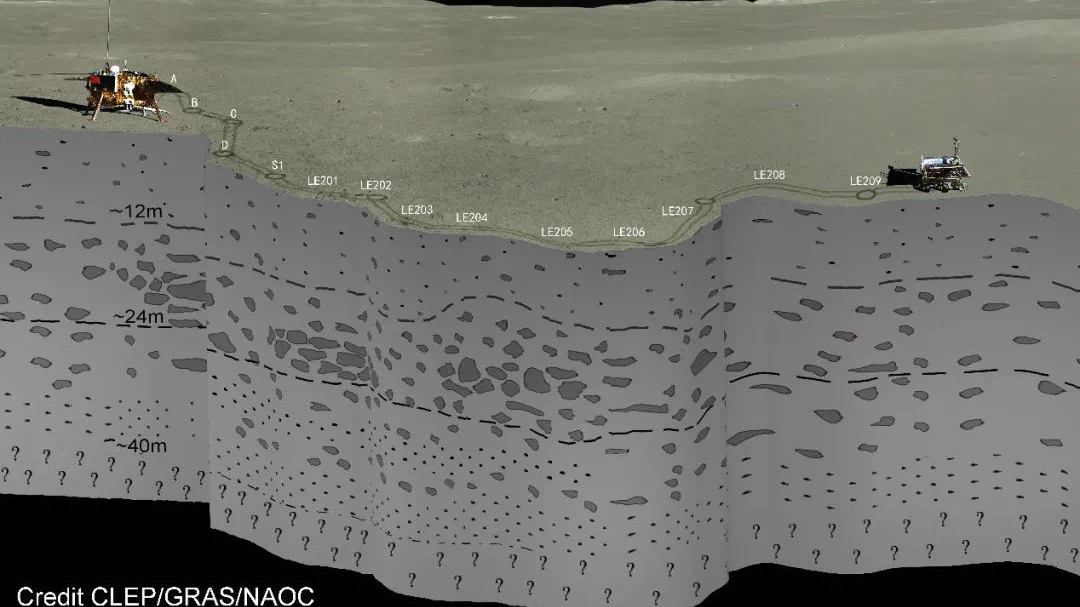 China's lunar rover Yutu-2, or Jade Rabbit-2, has helped scientists unveil the secrets buried deep under the surface on the far side of the moon, enriching human's understanding about the history of celestial collision and volcanic activities and shedding new light on the geological evolution on the moon.

China's Chang'e-4 probe made the first-ever soft landing on the eastern floor of the Von Karman Crater within the South Pole-Aitken Basin on the far side of the moon on Jan. 3, 2019. After its landing, the spacecraft immediately deployed its Yutu-2 rover, which uses Lunar Penetrating Radar (LPR) to investigate the underground it roams.

A study conducted by a research team led by Li Chunlai and Su Yan at the National Astronomical Observatories of the Chinese Academy of Sciences (NAOC) reveals what lurks below the lunar surface.

The research team used the LPR on Yutu-2 to send radio signals deep into the surface of the moon, reaching a depth of 40 meters by the high-frequency channel of 500 MHz – more than three times the depth previously reached by the Chang'e-3 lunar probe, which was sent to the near side of the moon at the end of 2013.

This data allowed the researchers to develop an image of the subsurface stratigraphy of the far side of the moon.

"We found that the signal penetration at the Chang'e-4 site is much deeper than that measured by the LPR at the landing site of the Chang'e-3 probe on the near side of the moon," said Li Chunlai, a research professor and deputy director-general of NAOC.

"The subsurface at the Chang'e-4 landing site is very complex, and this qualitative observation suggests a totally different geological context for the two landing sites," Li said.

"Despite the good quality of the radar image along the rover route at a distance of about 106 meters, the complexity of the spatial distribution and shape of the radar features make identification and interpretation of the geological structures and events that generated such features quite difficult," said Su Yan, another researcher from NAOC.

The scientists analyzed the radar image with tomographic technique, and the result shows that the subsurface is essentially made by highly porous granular materials embedding boulders of different sizes.

The study was published in the latest issue of Science Advances.