Infectious diseases, a severe threat to human health, are a common challenge to human development. Since the restoration of its lawful seat at the United Nations (UN) 50 years ago, China has made continuous contributions to the improvement of mankind's health.

Facing the unprecedented challenges unleashed by the COVID-19 pandemic, China has committed to protecting the life and health of people and pledged to make vaccines a global public good. The pledge also makes the shots accessible and affordable to everyone worldwide.

Ever since the approval of conditional marketing of COVID-19 vaccines in the country, China has been supplying vaccines to other countries, with the first batch of vaccine aid delivered on February 1, 2021. 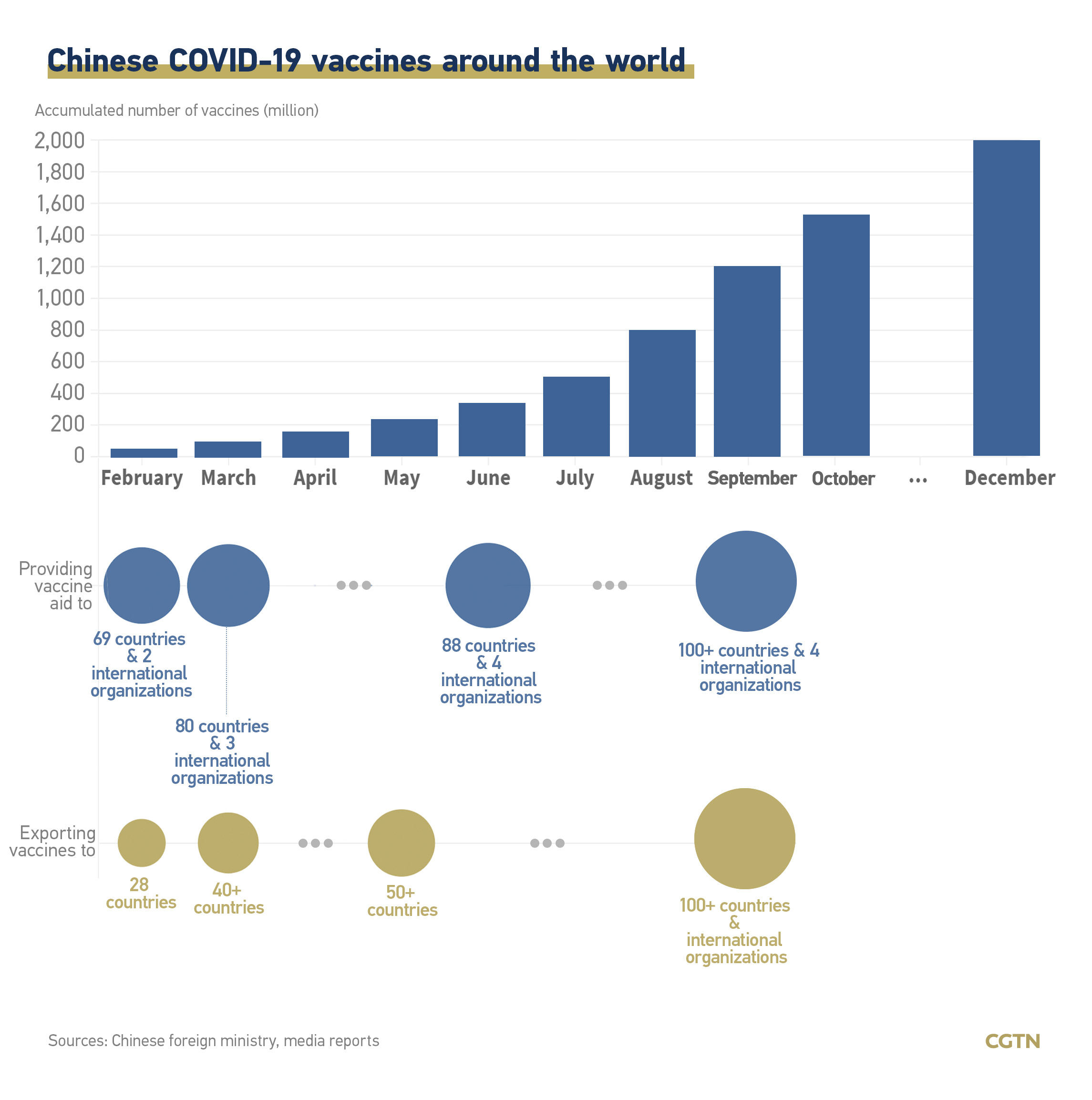 In August, the country announced to provide 2 billion COVID-19 vaccine doses to the world throughout this year. It also donated a fund of $100 million to COVAX - the global vaccine sharing scheme initiated by the World Health Organization (WHO) - the fund aims to provide vaccines to developing countries.

The commitment meant that China will provide vaccines to "nearly 10 percent of the world's population" while meeting its domestic vaccination needs, Wang Xiaolong, director-general of the Department of International Economic Affairs of the Ministry of Foreign Affairs, said during a video meeting with international journalists in August.

"The amount of vaccine doses that China has provided to other countries equals to over 45 percent of the doses it has administered domestically," he added. 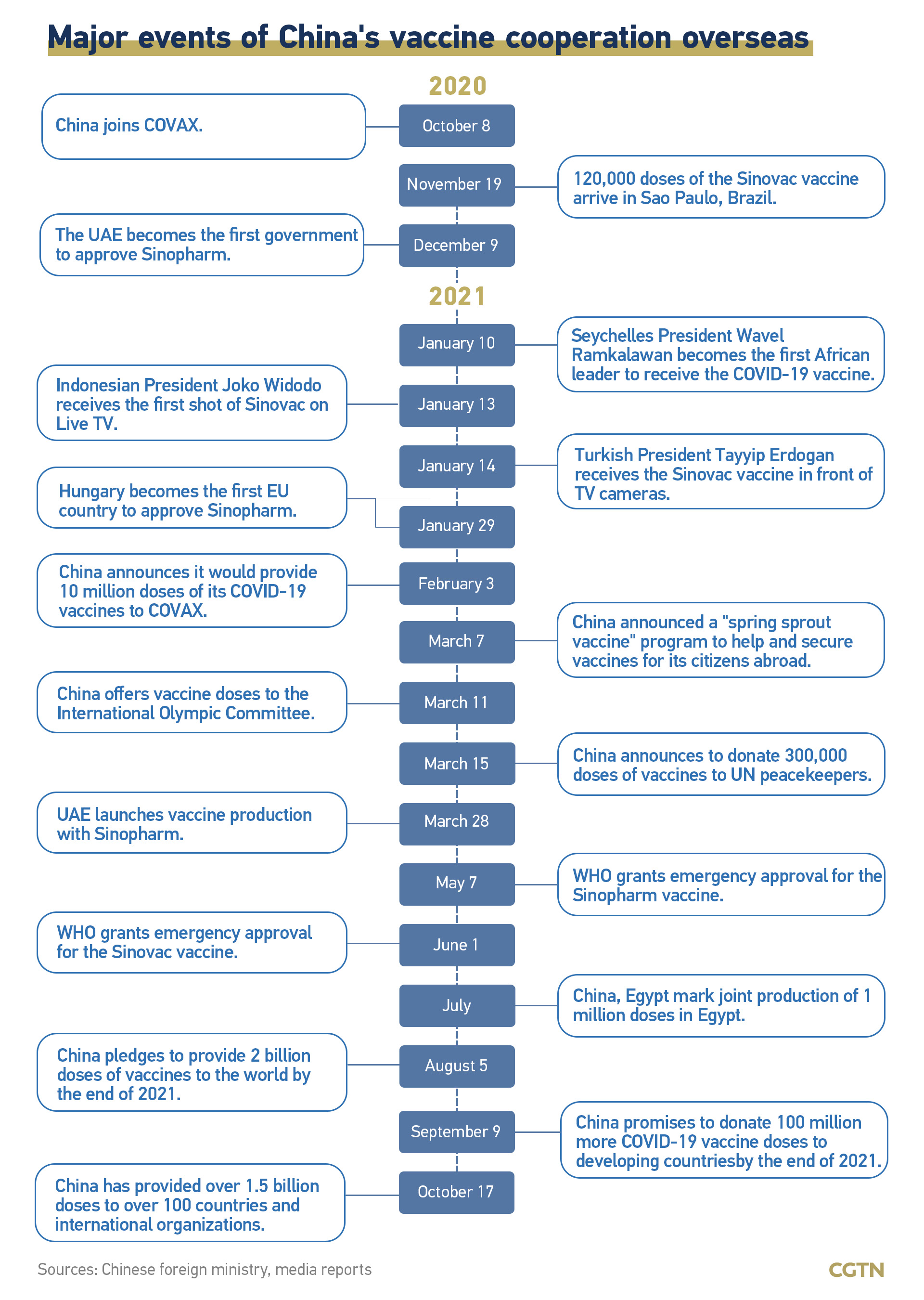 "As of October 17, China had provided more than 1.5 billion doses to over 100 countries and international organizations," said Chinese Foreign Ministry spokesperson Wang Wenbin on Thursday.

"In the past week alone, China has delivered more than 60 million doses of vaccines to some 20 developing countries in Asia, Africa, Latin America and Europe," Wang said.

Besides vaccines, China has also shared COVID-related information and response experience with other countries, providing them with large amounts of medical supplies and medical expert teams.

In response to the UN-initiated Global Humanitarian Response Plan, China has assisted in kind to over 150 countries and international organizations, and exported medical supplies to over 200 countries and regions, according to a position paper on China's cooperation with the UN released on Friday.

"In total, it has extended to the world over 320 billion masks, 3.9 billion protective suits and 5.6 billion testing kits," said the position paper.

'From 30 million cases to zero'

China's efforts in stamping out other infectious diseases, such as polio, malaria, lymphatic filariasis and trachoma, "has reached the goals of the WHO's strategic plan for the elimination or eradication of infectious diseases," Ren Minghui, assistant director-general of the WHO, told Xinhua in a recent interview.

The WHO recently declared China a malaria-free country, "a notable feat for a country that reported 30 million cases of the disease annually in the 1940s," said the UN agency. 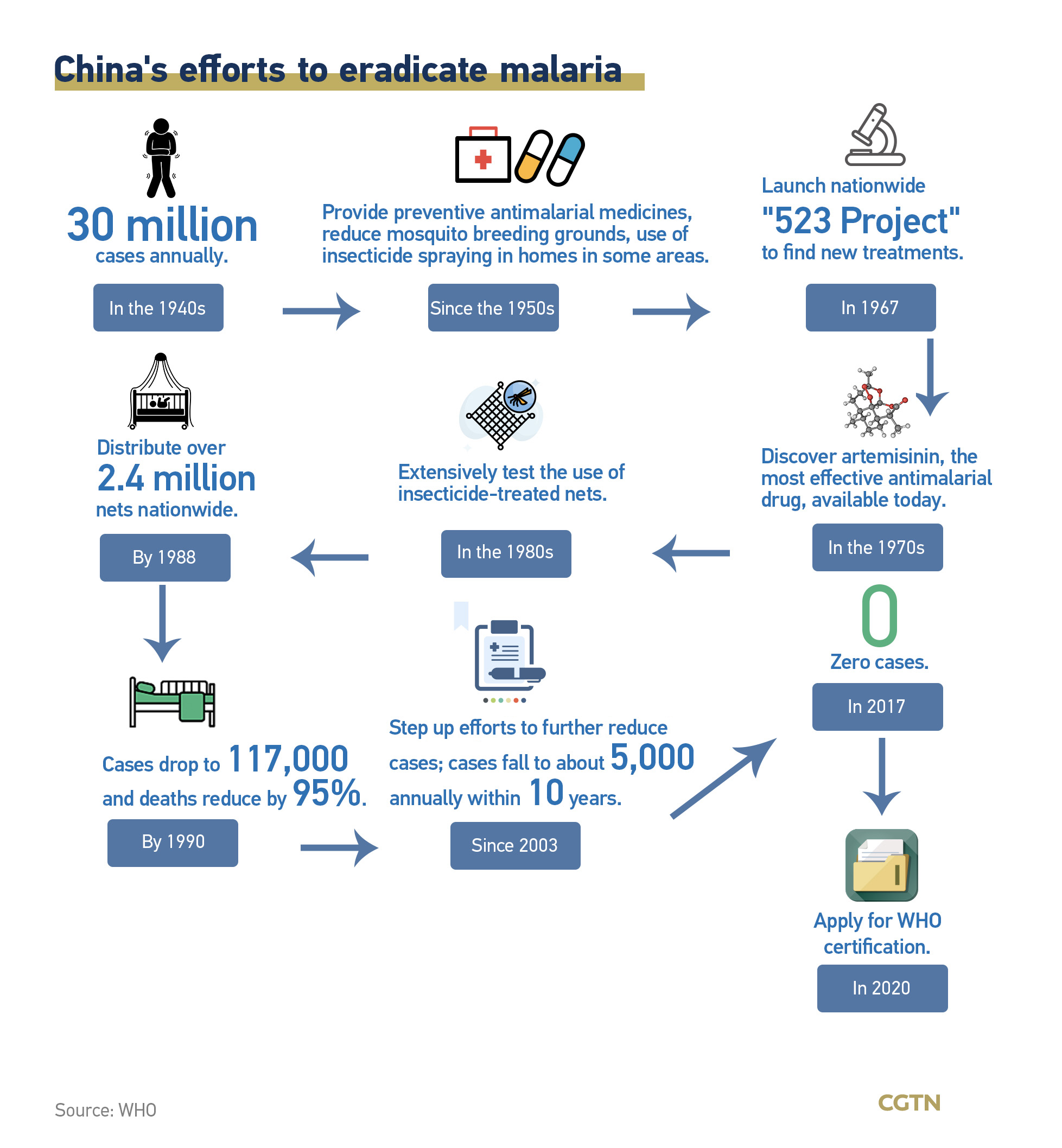 The WHO said the country's free basic public health service package and effective multi-sector collaboration are key to its success in dealing with infectious diseases.

When it comes to HIV/AIDS prevention and treatment, China has implemented a science-based succession of five-year plans, keeping the epidemic at a low prevalence level, according to the position paper.

The country has also closely followed the Ebola epidemic in Africa. It has taken the lead in providing medical assistance to the affected countries by dispatching many disease control experts and medical staff to assist African people against the disease.

"China supports the WHO and other UN agencies in mobilizing global resources to accelerate vaccine and medicine research and development and support Africa in building up public health capacity and realizing greater development," said the position paper.